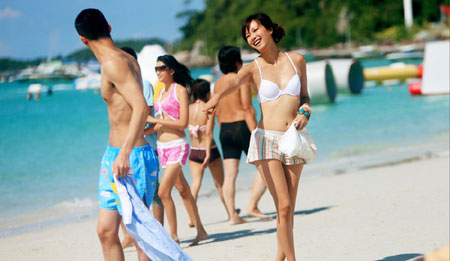 Tickets to events and screenings at the 2012 Newport Beach Film Festival go on sale beginning April 1, 2012.

A preview of the film festival's offerings April 26 - May 3, 2012 show once again a slate of 350 films from 40 countries. With the festival centered in the beautiful seaside community of Newport Beach, the community goes 'all-out' with its parties and programs for filmmakers.  Here's a preview of the 2012 line-up The festival has a variety of offerings where you can watch films grouped by themes, location or genre such as French, Australian, or Surfing films. Below, you can check out last year's film festival's "Asian Showcase."

The 2011 Newport Beach Film Festival is in full swing, April 28 to May 5 with 350 feature films, documentaries and shorts screening from 40 countries, with filmmakers attending from all over the world, free screenwriting and filmmaking seminars, and lavish After-Parties that go from 10pm to 2am - well into the late night.

On Saturday April 30, festival attendees were treated to free events including "A Conversation with Aaron Sorkin" with a personal appearance by Aaron Sorkin, award-winning screenwriter, producer and playwright, and seminars led by award-winning industry professionals on directing and film composing. On Sunday May 1, for the fourth year, Walt Disney Studios presented a collection of rarely seen animated works, hosted by Academy Award nominated film...

Congratulations to award-winning director and playwright Chay Yew, who has just been appointed as the new Artistic Director of the Victory Gardens Theater in Chicago, Il. Yew will begin full-time with Victory Gardens in July, 2011.

“We are extremely pleased and excited that Chay Yew has joined our company to continue the VG legacy that Dennis has developed over the past three decades,” said Board President Jeffrey Rappin. “He brings vast experience in new work development and, in partnership with Executive Director Jan Kallish, he will lead VG in bringing the best new work and artists to our stages. We are confident that our company is in good hands and that the mission of VG will be continued with Chay as artistic leader.”

“I’m excited and deeply honored to continue Dennis Začek’s vision in providing an artistic home for emerging and established theater artists in Chicago and around the country,” said Yew. “I plan to refine and amplify Victory Gardens’ mission of championing new plays and diversity as the mission remains close to my heart and everything I’ve done in American Theatre.”

Last year, Chakrabarti’s talents were on display in three films at the Festival. He created the score for Sundaram Tagor’s documentary The Poetics of Color: Natvar Bhavsar, and had roles in Claire McCarthy’s The Waiting City opposite Radha Mitchell and Joel Edgerton, and in Ajay Naidu’s Ashes.

The New York Indian Film Festival (NYIFF), presented by the Indo-American Arts Council (IAAC), is the oldest and most prestigious Indian film festival in the country. NYIFF continues through May, 8, 2011 and tickets are available online at http://www.iaac.us/nyiff2011/

Friday, May 6, 2011, Tribeca Theater 1, 3:30pm
Chakrabarti plays a Muslim groom about to wed a Hindu bride in New Jersey in Rehana Mirza’s Zameer & Preeti: A Love Story. When the groom gets a case of cold feet, will the wedding become just another case of religious conflict? Buy Tickets


Following the screening of “Do Dooni Chaar” was a discussion with Faisal and the Kapoors moderated by festival director Aseem Chhabra which had the audience laughing throughout. A gala benefit dinner followed at the opulent Jumeirah Essex House on Central Park South.