Jerry Yang leaves Yahoo! Remembering him back in 1998 by Tom Chin 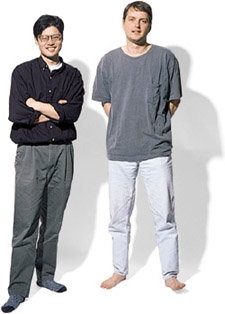 1998 isn't really that long ago, but for the Internet, it feels more like a century.

Back then, when a 14 year old kid created AsianConnections.com, an online magazine in search of his Asian American identity, we jumped on board.  As mainstream journalists from TV, radio and print, we had been fretting for the zillionth time about the poor and stereotypical coverage of Asian Americans in the media, any American media. (A problem, by the way, that persists even today.)

Scouting for stories, we rejoiced in the fact that Jerry Yang had co-founded Yahoo!, then the biggest star in the constellation of online ventures.

Today, it was announced that Jerry Yang has left Yahoo! What a ride that was for Jerry. Born on February 6, 1966, Jerry Yang has a lifetime ahead of him and we wish him well and hope he continues to innovate.

Digging into our archives here is a commentary by contributing writer Tom Chin, and a photo of Jerry and his Yahoo! co-founder David Filo. We will go back into our archives again and also post Jerry's exclusive interview with AsianConnections.com.

By the way, in honor of the upcoming Year of the Dragon, there is a new beginning - the site is soon to finish a brand new back end system. There will be a lot more images and videos. Our site used to be hosted on the servers of movie review site RottenTomatoes.com thanks to its founders, while I helped the start-up as one of their first national ad directors and video producers.

We will now add back the hundreds and hundreds of exclusive features and interviews we've done over the years including U.S. Astronaut Leroy Chiao who blogged to AsianConnections' columnist Lia Chang from his space station. And the first known U.S.-Asia web simulcast we produced for Warner Bros. with Jet Li, upon his arrival to Hollywood. AsianConnections led the web simulcast engaging audiences in the U.S. and in Asia.

The archives will be in easy, searchable databases. Plus, we will include a database of hand-picked recipes from some of the world's greatest chefs including Roy Yamaguchi, and Master Chef Martin Yan who has been our good friend, contributor and supporter since day one. We have a video interview with the late, great Julia Child for her favorite rice recipe. Plus, we will add back our regular feng shui tips and your Zodiac horoscopes with advice from some of the world's experts. And if we are lucky, we will also offer a way for you to interact with many of the new people featured on our pages.  And now about Jerry.

"About Jerry"  by Tom Chin

It is Summer, 1999 and alot has happened since that day I invited Jerry Yang to speak to our Asian Business Association in San Francisco. When Jerry first came to speak to us it was just three weeks after Yahoo! went public in 1996.  After sharing his vision with the ABA regarding the exciting, unknown potentials of the internet, we sat down for a 3 hour dinner and just talked about the possibilities and opportunities of the industry, and his pride in being Asian American.

Jerry was born in Taiwan and came to the states at the early age of ten, so he is quite Americanized. He is easy going, unassuming, articulate and quick witted. Attired in Silicon Valley standard attire...( jeans with a Yahoo! jeans shirt) he was very much the typical Silicon Valley/graduate student.

Although he was 26 at the time, with his equity stake valued at $36 million, he seemed to be unfazed with the whirlwind of business activities and public attention focused on him. His passion for the minority and less unfortunate was quite evident even then, when he spoke of the internet as a vehicle that will level the playing field, for it is colorless, genderless and borderless. The impact on society and the world could be so profound with this revolutionary, organized, cost effective access to information and knowledge.  The last time I had a chance to have dinner again with Jerry was in May, l998 where he was being honored by UC Berkeley's International House as "The Entrepreneur of the Year ."

Despite the continued public adoration, Jerry remains quite the unassuming, thoughtful, sensitive person, and with the foresight many years beyond his peer group. He is now married to a classmate at Stanford...(of Japanese decent from South America), has established a foundation, (named after his dog) to help the less fortunate.

Jerry's mother, a single parent, is humble and proud of her two sons accomplishments. His father had passed away when he was two years old. I believe much of Jerry's compassion and philosophy was greatly influenced and shaped by her.

His younger brother had just completed his Doctorate in Electrical Engineering at Stanford University and is seeking a teaching position. Currently, he has no interest in the business world.

Now at 29, a billionaire ... Jerry continues to balance the human side of his life to make a difference to improve society. This exclusive premiere article of Jerry Yang is not only to celebrate his technology and business achievements, but just as important, his contributions as a role model, his passion to pioneer, leveling the playing field, breaking the glass ceiling, and to remind us all, young and old, to continue to pursue your hopes and dreams, with the passion to have fun and deeply treasure what you have.

"About Jerry" is reprinted from one of AsianConnections.com's 1999 editions.
Photo of Jerry Yang and David Filo is published at AsianConnections.com by permission of Yahoo!
Contributing writer Tom Chin is the former Chairman of the Asian Business Association of San Francisco and co-Founder of Sino American Investments.