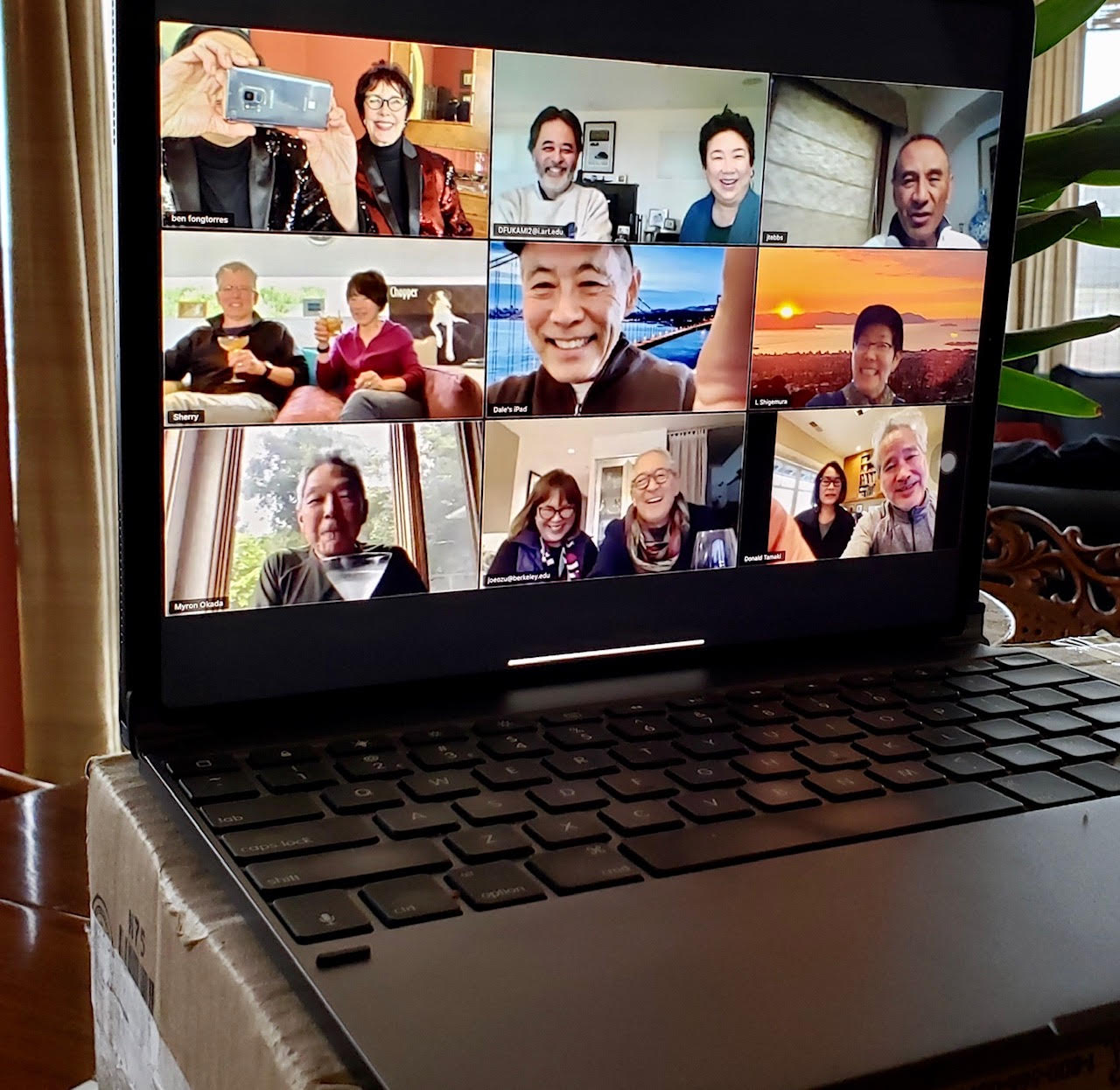 , we had more restaurant get-togethers, including dinner at the House of Prime Rib (almost as hard to get into as Hamilton) and a family luncheon for Chinese New Year at the stellar dim sum restaurant, Yank Sing. One evening, I went to the dive bar, El Rio, for the monthly jam staged by Los Train Wreck, and did my usual, a parody of a Dylan classic, “Rainy Day Women 12+35,” with lyrics I ripped from the headlines:

Just three days later, on the eve of St. Patrick’s Day, this most festive of towns was shut down at midnight.  Overnight, everything got cancelled or, soon enough, reconfigured into something we would learn to call “virtual.” That’s what it was for San Francisco State University’s Alumni Hall of Fame inductions, which I MC’d; that’s how it was for meeting with our tax preparer. Others, like our physical trainer and house cleaner, stopped coming over. It was just too dangerous.

We all began to Zoom. We let our hair grow long, or longer. We tried to believe what Gov. Gavin Newsom told us, about how we’d “bend the curve” and “meet this moment.”

Trapped at home, we began to look for things to do, like the last thing we ever wanted to do: de-cluttering. Even there, we were stymied. We filled boxes and bags with books, clothing and household goods that weren’t so good anymore. The Salvation Army was locked up, and bookstores were shut down, so our stuff went into the storage room.

We overshopped, for canned tuna and frozen dinners, liquor, water and toilet paper, and learned to stand in line on the sidewalk, six feet apart, to buy things that might end up in the garage…or the storage room.

We cooked (or microwaved Amy’s entrees) more than ever, and when restaurants began to offer takeout and delivery options – and, later, were allowed to serve food outside, in custom built parklets – we supported them as much as we could. But we had to adapt to new worlds there, too. Want to see the menu? Scan it on your smartphone. Want to order? The phone. Ready to pay? The phone. And if you didn’t have a smartphone? Well, there’s Amy’s dinners…

We learned, or relearned, or made up new words, names and phrases – pandemic, social distance, Tik Tok and Instagram (and DM), EDD, KN-95, Dr. Fauci, essential workers, the new normal, vaccine hunters, and “Blursday,” which every day became.

We thought about adopting a dog. For a while, they were plentiful, but too many of them were pit bulls, or on their last legs. But we sent donations to four adoption agencies and scanned their pages and videos. You never know when you might make a love connection.

While we waited, we tried to stay in shape, with the Walk at Home series on YouTube. Basically, you walk in place, with variations—side steps, kicks, knee lifts, and more. It’s free and breezy. The instructors are peppy and only a little too perky, and you revel when, after just 15 minutes, you’ve walked a mile. To balance out all that good health, Dianne became a student of Michael Cecconi, The Mobile Mixologist on Instagram, loaded up our Shelves of Alcohol, and whipped up a good number of great cocktails.

And we – well, I – took up the harmonica and returned to my guitar, on which I remain a beginner. The cocktails don’t help.

Dianne and I had a few outings, just to be … out. We drove to Half Moon Bay just for hamburgers at Dad’s Luncheonette; we visited friends in San Jose and Mill Valley; we went to various neighborhoods and saw the bleakness that was Chinatown and North Beach; Hayes Valley, Union Square and Union Street. Grant Avenue, one day early in the pandemic, was a ghost town; no people, no cars but ours. The only person we spotted, in a two-block stretch: our pal Betty Louie, who owns properties in Chinatown and happened to be leaving her office.

Mostly, we were home, where we stared at TV and iPad screens, whether to binge-watch Tiger King and The Crown, or visit virtually with friends and family.

I was invited to do various fun events, ranging from an Almost Famous-themed fund-raiser for Portland Center Stage and a Q&A with the authors of the excellent book, San Francisco’s Chinatown, to playing Bob Cratchit in a radio play of A Christmas Carol. It was all done by Zoom.

Our main takeaway: There’s no substitute for actual human interaction. We need those hugs and air kisses; we don’t want grids of friends in their homes; we need them in one room, cross-talking and laughing like crazy, without fear of feedback and frozen images. At events, we need to see and hear audience members, and to be able to meet them afterwards. With the Chinese New Year Parade, we’d celebrate by hitting a restaurant and enjoy lemon drops (Julie, my co-anchor) and Manhattans (moi). Now, we clicked “Leave,” and that was it.

We learned that we could survive, cooped up at home, with help from technology and with the occasional escape. But who wants to live this way? We really do need each other.

And now, slowly and not all that surely, early in the post-Trump era, we are getting a grip on things. Dianne and I got our second vaccinations in February and have reached “peak protection.”

We remain cautious. Valentine’s Day dinner was takeout from the Zuni Café. Because there was no Chinese New Year Parade, we watched a special on KTVU, featuring mostly past highlights, for which I pre-recorded introductions. When I went to a studio to record audiobook versions of two of my books for Audible, I was greeted by a staffer with an infrared thermometer and COVID-19 questions.

And, in a climate of anti-Asian sentiment and violence, I try to be more careful than ever. But the other evening, walking to pick up food from a Vietnamese pop-up, Bodega-SF, I stumbled over a raised portion of the sidewalk and fell forward. I had a pretty soft landing, just kissing the pavement. There was no affection involved; I could feel the blood behind my facemask.

I was lucky. My jaw and teeth were intact. My right hand, which broke the fall, was still right. At home, with our Shaking Beef and Bun Cha Hanoi safely set aside, we determined that I had only cut my lower lip.