Don't miss this! I flew to Columbus, Ohio from California to view renowned photographer Annie Leibovitz's complete "Master Set" and other photographs from her diverse and broad range of work and I am glad I did.

More than 200 of her photographs are on view now through December 30, 2012 at the Wexner Center for the Arts on the Ohio State University campus in Columbus, Ohio.

Annie Leibovitz is the 2012 recipient of the prestigious Wexner Prize which recognizes an artist whose work reflects exceptional innovation and the highest standards of artistic quality and integrity.

I've visited exhibitions at many of the greatest museums in Europe, Asia and in the U.S., and the Annie Leibovitz exhibition ranks right up there with the best. The Wexner Center for the Arts is the first institution to be able to exhibit the complete "Master Set" which is a collection of 156 photographs personally selected by Annie Leibovitz.

The exhibition shows photographs spanning 40 years of Ms. Leibovitz' extraordinary career. The from early years as the Chief Photographer of Rolling Stone, to portraits of celebrities and notable people of the past spanning 40 years from Muhammad Ali, to President Barack Obama and Queen Elizabeth. 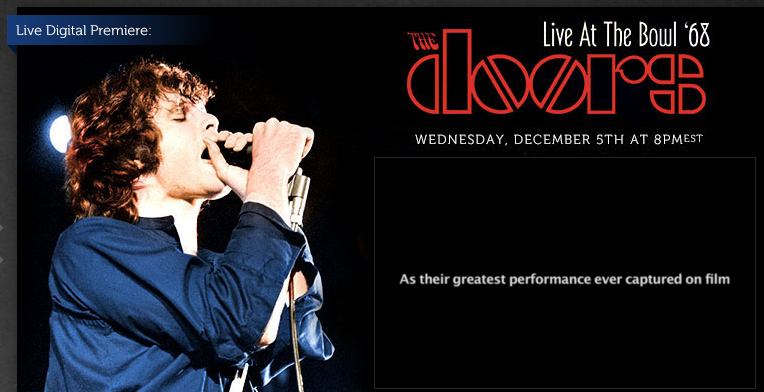 Qello and Eagle Rock Entertainment Host a Facebook Digital Premiere of the Restored LIVE AT THE BOWL ’68 Concert Film.

New York, NY – On December 5th, fans of The Doors will have the opportunity to watch Jim Morrison, Robby Krieger, Ray Manzarek, & John Densmore like never-seen-before live in concert on Facebook. Qello, the music entertainment digital streaming service, along with Eagle Rock Entertainment are hosting a Facebook Digital Premiere of The Doors 1968 live concert at the Hollywood Bowl, which is considered to be the band’s finest concert on film.

The film of this historic concert has been meticulously restored using the original camera negatives; the audio has been remixed and mastered and three unreleased tracks have been resurrected, marking the first time the concert can be seen in its entirety.

The Doors keyboardist, Ray Manzarek says, “the quality is stunning, mind-blowing; it’s like being there right on that Hollywood Bowl stage with me, Jim, John, and Robby.”

A ticket to the Facebook Digital Premiere comes with a trove of treats for music fans; for $4.99 ticket holders get:

oAccess to watch LIVE AT THE BOWL ‘68 for 30-days. oAccess to participate in the *LIVE Q&A with Ray Manzarek on Dec.5th (immediately...

Tsujihara, 48, the twenty year Warner Bros veteran was named CEO on Monday and is expected to take over the post March 1.

He has been president of Warner Bros. Home Entertainment since its founding October, 2005. He has managed the studio's DVD business, as well as a range of responsibilities outside of the television and movie business helmed by other divisions, from games acquisitions and content distribution via VOD and other digital platforms.

Tsujihara received his BA in business administration from Universiaty of Southern California, and an MBA from Stanford University.

Its been reported in the news media that Tsujihara has a humble and low-key management style, and was considered a "Black Sheep" of the list of likely candidates for the CEO post. Current chairman Barry Meyer, told LATimes.com "Everyone needs a leader, and Kevin was the best equipped to unify the company at this time." We just thought he was the best for the whole company."

He is the son of chicken farmers in Petaluma, California, and grandson of Japanese immigrants. When he becomes CEO on March 1, he will be the fifth CEO in Warner Bros. 90 year history, and the first Asian American to run a major Hollywood studio.