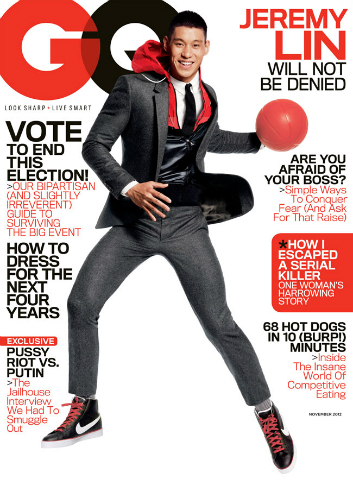 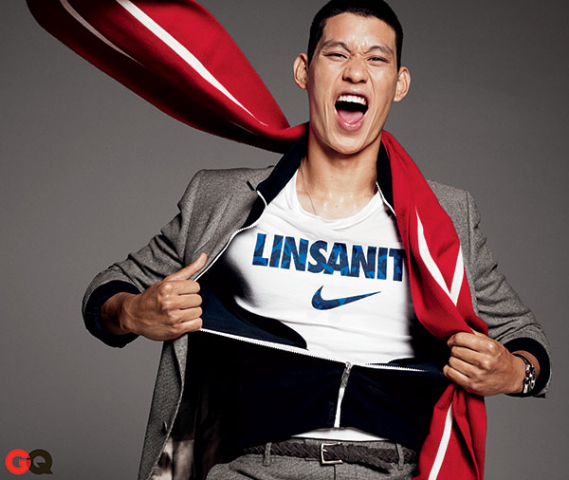 "There's a lot of perceptions and stereotypes of Asian-Americans that are out there today, and the fact that I'm Asian-American makes it harder to believe, even crazier, more unexpected," he says. "I'm going to have to play well for a longer period of time for certain people to believe it, because I'm Asian.

And that's just the reality of it." It's not all that dissimilar from what Yao Ming went through. "When Yao came out his rookie year as the first pick of the Draft, you have Charles Barkley saying, 'If he scores seventeen points in a game, I'm going to kiss a donkey's butt,' " Lin says. "If you do it for long enough, I think you would get the respect."

GQ's Will Leitch asks Lin what he would want to say to anyone who believed in him last year, the people who made Linsanity happen. "I think they changed my life dramatically," he says. "My life will never be the same—but I don't think I necessarily did that for anybody, you know?

The impact on my life was greater than the impact I had on any of their lives. People are moved by my story, but they're only moved by my story because of what I do on the court." The trick, he says, is making sure he's able to be both his true self and the player fans need him to be.

In the Locker Room with Jeremy Lin at Madison Square Garden by Suzanne Joe Kai  March 11, 2012

Linsanity Etiquette 101 - The Historical Milestone Jeremy Lin Achieved - For All of Us  by Suzanne Joe Kai  March 9, 2012

Linsanity - Confirming Stereotypes? (5 of a 5 part series) by Author, journalist and former reporter with the Wall Street Journal William Wong

Jeremy Lin "Am I Linsane? You betcha!" by Author, journalist and former reporter with the Wall Street Journal William Wong