We are proud to take o 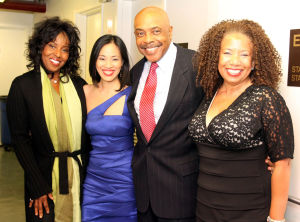 ver Lia's "Backstage Pass" column this month to congratulate her on her upcoming performance in "Power Play."

The actors will perform the play in a staged reading at the National Black Theatre Festival in Winston-Salem, North Carolina.

Roscoe Orman's Franklin Wright has been propelled to political stardom by his Asian American campaign manager, played by Lia Chang.

Just three days before the election, hoping to become California’s first African American governor he finds himself in a scandal that threatens his career and marriage — a scandal based on a secret that his wife, played by Paulette Pearson Washington, has harbored for years.

Lia Chang is an actor, a professional photographer, and an award-winning multi-platform journalist.

She is the author of AsianConnections' Backstage Pass with Lia Chang column. Her "Lia Chang Theater Portfolio "In Rehearsal" featuring AAPI playwrights and actors on Broadway and theatrical venues across the nation can be viewed at the U.S. Library of Congress.