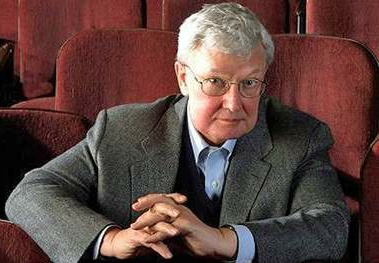 Roger Ebert 1942-2013 Photo: RogerEbert.comRoger Ebert lost his battle with cancer today. He will be greatly missed. Most famous for his film criticism, he was the first movie critic to win a Pulitzer Prize for Criticism.

Since 1967, and up to just two days ago he wrote a column for the Chicago Sun-Times.

He authored twenty books, and co-hosted several long-running syndicated television shows including Siskel and Ebert at the Movies.

I will remember Roger Ebert not only for his reviews and commentary, but also for his advocacy of Asian American cinema.

I thank Roger Ebert for his outspoken support and standing up (literally) for a film called Better Luck Tomorrow.

When Ebert stood on his theater seat and yelled back at an audience member who was chastising the film's director Justin Lin and his cast on stage for making an "empty and amoral" film, it was a watershed moment in Asian American cinema.

Mind you, this was at the third screening of Lin's film Better Luck Tomorrow at the 2002 Sundance Film Festival where alot is at stake. Filmmakers are hoping that distribution deals are made.

A video posted on Youtube captured the moment. (click here for the full story with the Youtube video). The audience member said, "You know how to make a movie. But why with the talent up there and yourself make a film as so empty and amoral for Asian Americans and Americans?"

Then Roger Ebert gets up and says "What I find very condescending and disturbing about your statement is nobody would say to a bunch of white filmmakers, "How could you do this to your people?!" (applause from the crowd) Then Ebert continues, "Yes, film has the right to be about these people and Asian American characters have the right to be whoever the hell they want to be. They do not have to represent their people."

And as America's influential dean of film critics sat back down in his seat, he had just put Better Luck Tomorrow on the map.

"Little did I know that Uncle Ebert would play such an important role in my (our) life so many years later at the Sundance Film Festival.

Were it not for Uncle Ebert hoisting his large frame atop a theatre seat to loudly exclaim his opinions on the double standard imposed upon “ethnic” cinema and race expectations sprouting from it, I wonder if I’d even be working in Hollywood today.

I wonder if BLT would have had enough juice to stand above the larger, more well-funded, highly star-studded competition films.  We owe Roger Ebert a lot.  Perhaps more than he’ll ever know.  We are entwined in so many unexpected ways…"

Roger Fan is not alone in his gratitude to Roger Ebert. Ebert's actions in support of that film has meant alot to many of us who would like to see more Asian Americans in filmmaking in front of and behind the camera, as well as more Asian American films to reach wider audiences.

I happen to live and work with many people who are film enthusiasts. So much so, that back in 2002-2003, when Justin Lin put the word out to enlist ground support to help encourage people to go out and buy a ticket to see his movie, we were among his hundreds of unknown, unnamed volunteers. We were on a mission. We also knew that if his movie flopped at the box office, it could be a set-back for Asian American cinema.

Since it was pre-Facebook and pre-Twitter days, I remember grabbing friends to volunteer to do an old school street team effort to get the word out. We bought tickets, posted stories online, and put up flyers and posters. Our writer/editor Lia Chang in New York did an interview with Justin Lin.

At that time, I was helping an internet start-up called RottenTomatoes.com, which was created by people who loved movies. It was a powerful hands-off computerized movie reviews rating system which aggregated the reviews of independent movie critics. The site was the brainchild of Senh Duong, his founding partners Patrick Lee and Stephen Wang, and founding team members including Binh Ngo, Paul Lee, Wilson Wang, Susan Nakasora, Lily Chi, Mark Moran and Pungkas "Pongky" Nataatmaja. Back then, before RottenTomatoes.com was acquired, this website (AsianConnections.com) was housed and managed on RT's servers so I didn't have to focus on managing the tech side (thank you RT), and could help as one of RottenTomatoes' ad directors and Hollywood red carpet movie premiere video producers.

On Friday April 11, 2003 just as Better Luck Tomorrow was about to be released for its opening weekend in movie theaters, Roger Ebert posted his review.  He wrote that Better Luck Tomorrow was a "brilliantly made film."  With Roger Ebert further solidifying his praise for the film, as well as the positive reviews from other movie critics, It was a proud day for Asian American cinema.

With the passing of Roger Ebert today, we've lost a champion. He has been courageously fighting cancer, and then he left us in style. He did what he loved to do all the way up to two days ago - reviewing movies and writing about them for his millions of fans. Yesterday, April 3 was his 46th year as a film critic at the Chicago Sun-Times.

As New York Times' Douglas Martin writes: Mr. Ebert — who said he saw 500 films a year and reviewed half of them — was once asked what movie he thought was shown over and over again in heaven, and what snack would be free of charge and calories there.“ ‘Citizen Kane’ and vanilla Häagen-Dazs ice cream,” he answered.

About the writer: Suzanne Joe Kai is CEO and executive producer of STUDIOLA.TV and CEO of CSI International. She was an on-camera TV news reporter and program host for KRON-TV (San Francisco’s former NBC affiliate), and also worked at KCBS Newsradio (San Francisco), KTVU-TV (Bay Area’s Fox affiliate), KGO-TV (San Francisco’s ABC affiliate) and KGUN-TV (ABC affiliate in Ariz.). She is directing a documentary in development, “Like a Rolling Stone: The Life & Times of Ben Fong-Torres.”  In her 20s, she co-founded a national bank in a region which needed financial services and served on its board for nine years. The bank now has 69 branches and is part of a financial group listed on Nasdaq. She is a member of the Academy of Television Arts & Sciences, and a board member of the Asian American Journalists Association, Los Angeles chapter.  http://www.linkedin.com/in/suzannekai   @suzannekai