What’s Going On? Everything, All at Once

With “Like a Rolling Stone: The Life and Times of Ben Fong-Torres” the documentary about me, now out today and streaming merrily along on Netflix, I’m officially in the film industry.

Actually, that’s been the case since last June, when the documentary, which stole its title from a popular column at Asian Connections created by director Suzanne Joe Kai's son Mike when he was 14, premiered at the Tribeca Film Festival in Manhattan.

In the months since, the film, which was produced, written and directed by Suzanne, screened at various other festivals, picked up awards, including a Critics Choice honor, a Nomination by the Writers Guild of America for Best Documentary Screenplay, a Best Music Film Award at the Newport Beach Film Festival, the Audience Award from the Asian American Film Festival in San Diego, and scored more than 112 press reviews and mentions (so far) - all quite positive reviews. 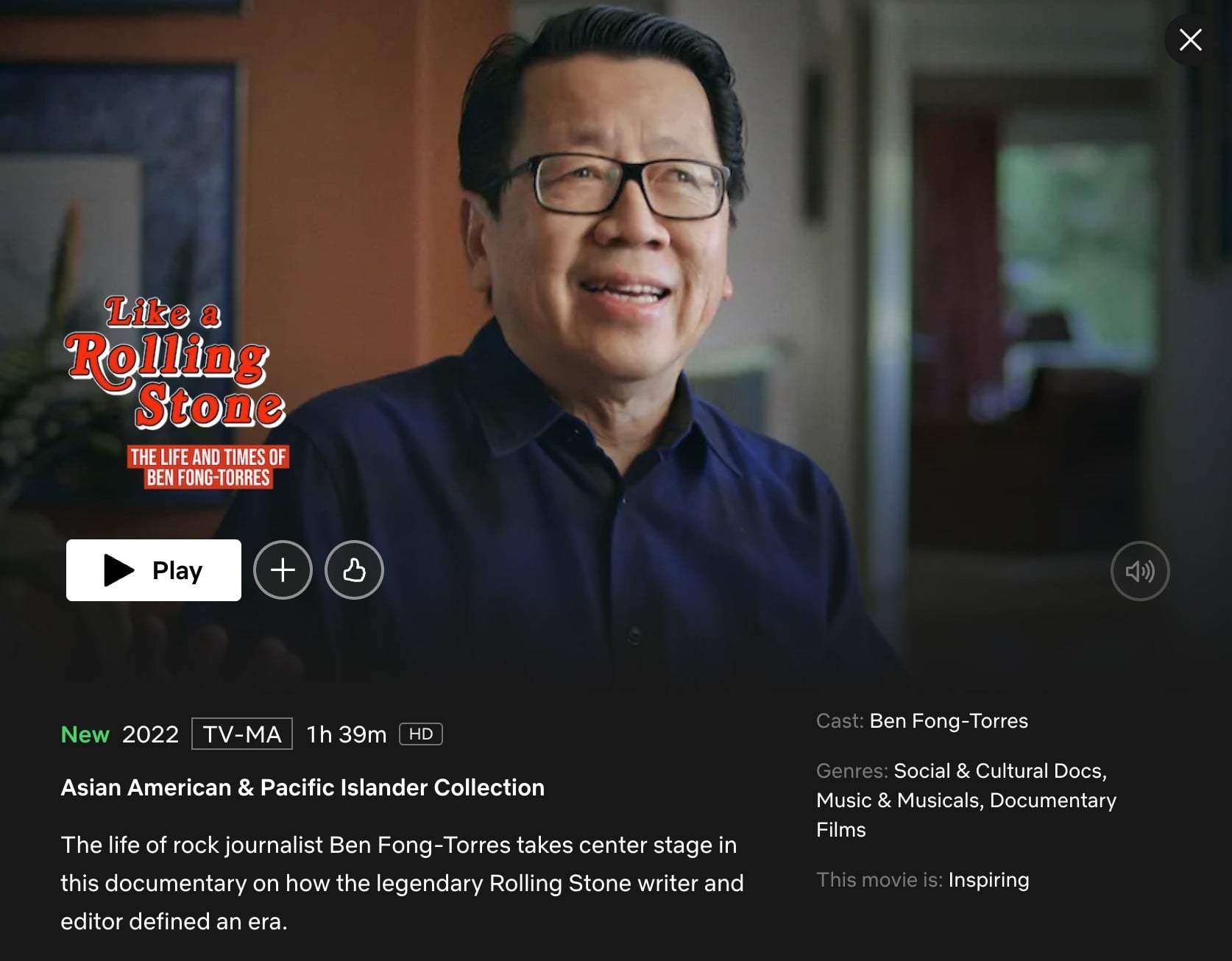 And I find myself mingling with movie people. In March, I attended the premiere of “Everything Everywhere All at Once,” starring Michelle Yeoh, at the Castro Theater here in San Francisco. 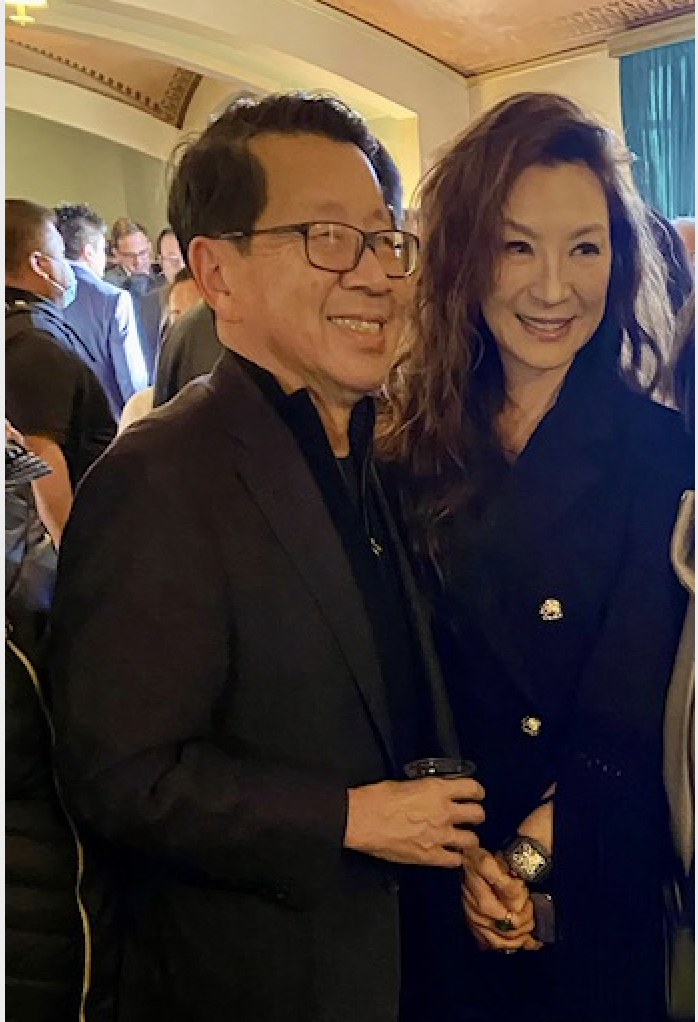 Our only previous connection was at a Lunar New Year parade, in 2018, when she was the glamorous grand marshall and I was co-anchor of KTVU’s broadcast.

From a distance, we waved at each other. Or maybe she was just waving to her fans.

This time, we met. At the packed pre-screening reception on the Castro’s mezzanine, everybody wanted photos with her. I was no exception, but used our parade connection to engage her.

I suggested we get into kung fu poses, but she just laughed, and smiled for our photos.

She laughed again moments later when I spotted her behind a group that was posing for a shot, and shouted, “Hey, Michelle, could you move?”

She’s fantastic in “Everything…”, a wild and crazy multiverse/sci-fi/kung fu acid trip of a movie.

And you get Jamie Lee Curtis playing an IRS agent. Yeoh!

Another star sighting: I was asked to interview Ahmir Thompson, better known as Questlove, onstage at the very same Castro Theater.

This was in November, when he screened “Summer of Soul” there as part of his promotional campaign for the film, which he directed.

The film, chronicling the 1969 series of weekend concerts in Harlem, mixed sizzling performances by R&B, jazz and gospel luminaries with a backdrop of social changes and unrest.

It’d already streamed on Hulu for months.  No matter. From Sundance to the Oscars, he swept pretty much every award “Summer” qualified for.

Having seen the film, and having enjoyed his work with his band, the Roots, and having heard that, as a kid, he was a huge fan of Rolling Stone, I was delighted to meet him. He was delighted, too. The pre-screening gathering was across the street, at Harvey’s, a restaurant named for Harvey Milk.

Ahmir was given a corner table, and he asked me to join him. Turns out that he was born in 1971, and by the time he got addicted to Rolling Stone in the early ‘80s, I was just about gone.

But he read my articles in back issues, and he displayed the magazine’s covers on his bedroom walls.

Another addiction of his, I had read, was to “Soul Train.”

Again, he was too young to catch that ride, so it was my pleasure to show him a photo of host Don Cornelius with me at the Soul Train podium, when I was doing an article about the show.

Dianne and I were addicted, too, to this Saturday morning bandstand show.

After posing for photos with various fans, we continued the conversation on stage at the Castro.

Bookies: I have a hand – or at least a few fingers – in two new books, one humongous, the other quite compact. The biggie is “A Guide to the Labyrinth,” a lavish box set of the writings of the late Jim Morrison. His song lyrics and poetry (plus photographs and comments from interested parties) are in a volume heavy enough – just under ten pounds – to be part of a workout. Because I was the last American journalist to talk with Jim before his fateful trip to Paris in 1971, I am one of 30 or so voices reflecting on him, his work and his dreams.

A Guide to the Labyrinth is from Genesis Publications, master of extravagant volumes, so there are bonuses, including a recording of Morrison, and faithful replicas of notebooks in which he wrote his prose and doodled his doodles. Over 600 pages in all. For the Jim Morrison/Doors completist, this will do the trick, at about $500.

Quite more modest in cost – can you handle $26? – and volume – 176 pages – is “12 Notes: On Life and Creativity,” by Quincy Jones. Yes: the man, the musician, the record producer, the film producer, the legend. In his late ‘80s, he decided to offer advice to younger artists – or anyone seeking to take advantage of their innate creativity – on how to succeed. He mixes no-nonsense advice with vivid stories from his past, of experiences that taught him valuable lessons and made him the icon that he is.

To help write the book, which borrows from his other books and documentaries, he tapped Alyssa Lein Smith, a brilliant young VP in his production company who’d been helping him navigate social media. Because this would be her first book venture, he asked me to back her up as an editorial consultant. I’ve known Q for several decades, since we met for an onstage Q&A in 2001 in Marin County.

In fact, Quincy is in “Like a Rolling Stone,” chatting and scatting.

Ben Fong-Torres tells stories and plays music by artists in the documentary, “Like a Rolling Stone,” on Pandora (“Stories with Ben Fong-Torres”) and Live365 (“Radio BFT”).