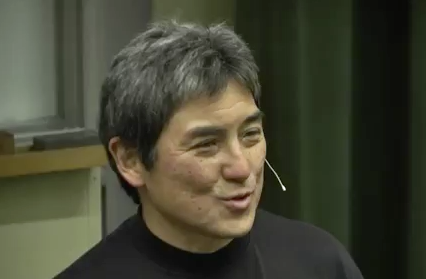 We received alot of positive feedback to our posting of Guy Kawasaki's Spring, 2013 talk at the UC Berkeley Startup Competition (Bplan).

The former chief evangelist of Apple and co-founder of Garage Technology Ventures is such a good speaker that you wanted to hear more of him.  He was the keynote speaker at the first Donald W. Reynolds Governor's Cup Business Plan Competition at the University of Central Oklahoma in Edmond in 2005, and its timeless.

You can click on the top blue headline to the full story and his video or click here. In his keynote, "The Art of the Start" he gives insight into the characteristics that make a successful start-up.

His first test is, "Are you making "meaning?"  He finds that the start-ups which have the highest chance of success are created by people who have a mission. He says they want to make "meaning" and not money. He feels the entrepreneurs who more often succeed are those who want to change the world. They want to make the world a better place, to improve the quality of life, to right a wrong, to fix something and change it to make it better, or they want to prevent the end of something good.

He urged his audience of students to be "Prototypers" not typists. He was referring to entrepreneurs who create things, or develop something, versus those who merely write a business plan with a mission statement.

Second, "You should polarize people. Create products and services that you love."

Third, "Find a few soul mates. There is this myth about the solo entrepreneur - that is a vastly overrated and inaccurate myth." "You need people to balance off your skillset, if you are great at engineering you need sales, if you are youthful and have vision and passion you need adult supervision to keep you in line. When its cold you want people to huddle with you and keep you warm. When you fall down you want someone to pick you up. For every Bill Gates, there's a Steve Ballmer, for every Steve Jobs, there's a Steve Wozniak."

Fourth, he says, "Define a business model. Be specific. Keep it simple. Ask women about the business model. I believe that men have a fundamental flaw...I believe that deep in the DNA structure in every man is a male 'killer gene"...predisposed to kill things. But one place not suppressed is the desire to kill the competition. Thus, when you ask a man should we start a company to kill (X) comany? Yes. So, when you come up with a grand idea with a business model to change the world, ask women."

Fifth, "Weave a MAT (1. Milestones, 2. Assumptions and 3. Tasks). Its about prioritizations. Set milestones to create the valuation of your company like finish the designs, finish the software, collect the money..."

Sixth: "Niche thyself. Have the ability to provide something truly unique. "

The annual business plan competition is one of the nation's top startup competitions. He goes over his top ten (actually eleven) mistakes that entrepreneurs make.

Kawasaki talks about the pressures he faced as a child of an Asian American immigrant family, and urges young people to "relax." At the (approx) one hour and 14 minute mark into his lecture (1:14) he talks about wanting to quit law school which he was worried would bring shame to his Japanese American family.

Kawasaki makes candid remarks about venture capitalists vs bootstrapping your start-up and his interest in the "Lean Startup" approach to launching businesses. He shares his views on immigration, and his respect for the new immigrants who come to the U.S.

To view Kawasaki's comments click on the link below: