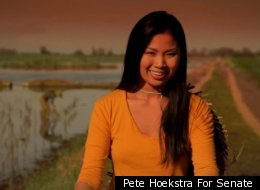 A new super PAC is demanding an apology from GOP Senate candidate Pete Hoekstra for the broadcast of his controversial ad in Michigan on Super Bowl Sunday depicting negative stereotypes of Asian Americans. The ad shows an Asian female speaking in broken English, cycling through what appears to be rice paddies, "Your economy get very weak. Ours get very good."

Actress Lisa Chan apologized for her involvement. The recent UCLA graduate wrote on her Facebook page,"I am deeply sorry for any pain that the character I portrayed brought to my communities."

“In an age where virtually all Americans have moved forward on race relations, it seems Congressman Hoekstra has taken a giant step back. We are here to say we are not going to put up with it. We are here to tell him we are outraged and demand an official apology," said Jesse Tangkhpanya, the national political director for the American Values super PAC.

Amidst the firestorm from members of the AAPI community and mounting pressure from both Republicans and Democrats, the ad has been taken down. It is off Hoekstra's Facebook page, YouTube channel, and the website now reverts to Hoekstra's Senate campaign site.

The day after the Super Bowl Hoekstra was asked by Fox's Megyn Kelly whether his Super Bowl ad depicted an unfair stereotype referencing the actress' faked broken dialect. Hoekstra replied,"It's not a stereotype at all"...."Through the creative (design of the ad) this is a young woman in China who's speaking English. That's quite an achivement."..."There's nothing in here that has a racial tint at all," Hoekstra said.