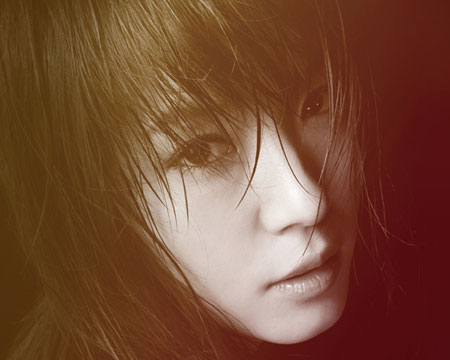 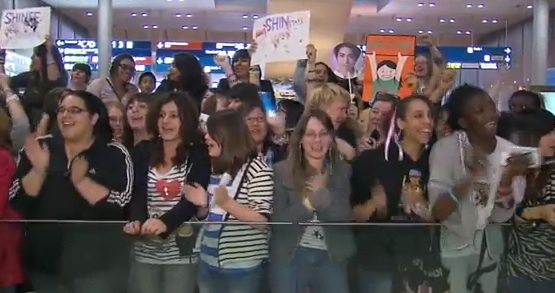 Leaders from Hollywood and S. Korea’s entertainment industry and academia convened in November for a summitat the University of Southern California in Los Angeles to explore the impact and future of Korea’s pop culture and entertainment, encompassing its music, films, television drama serials, and comic books.

The two-day summit Korean Wave Initiative – Hallyu: Riding the Korean Culture Wave for a Globalized World was held to explore the exciting developments of this trend and to discuss ways for Korea to promote this as a global brand.

Two other major K-Pop concerts were hosted on the East coast this past Fall by K-Pop veteran organizers, a free concert in New Jersey, KBS Free Concert which was part of the New York Korea Festival, and at Madison Square Garden in New York City SMTown NYC produced by S. Korean entertainment company SMTown.

The opening session at USC featured a conversation about the history of Korean film with award-winning S. Korean film director Im Kwong-taek (image left) with USC’s Dr. Youngmin Choe, Assistant Professor of East Asian Languages and Culture. Im Kwon-taek is credited as one of the founding figures of the film movement "New Korean Cinema," also known as "Korean New Wave" which has brought worldwide critical acclaim to Korean cinema. 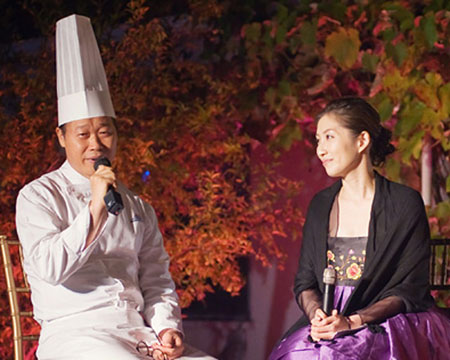 welcomed the dinner guests arriving in black tie and Asian national dress to his residence in Los Angeles.

Yvonne Kim, Executive Director of Asia Society Korea Center emceed the evening and hosted a talk on stage with Master Chef Bruce Byung-Woo Lee of Lotte Hotel Seoul (image right) who flew in to prepare the dinner which was attended by members of Hollywood and Korea’s entertainment industry, business, education, and government.

The Women Leader Award was presented to Michelle Park Steel, Vice Chair of the California Board of Equalization, currently the highest ranki

Nam, born in Seoul, Korea has been playing the piano since she was 4. She moved to the U.S. to further her music education, and has a diverse background in music from classical to jazz. She has been a film composer for numerous Hollywood films and television shows. She cited her Korean cultural background as a positive influence on her career.

Throughout the evening, each course was introduced by speakers who discussed the significance of the Korean dish and its healthy benefits. Asia Society of S. California board member Peter Shiao introduced Bibimbap, one of the most popular Korean dishes. He taught guests how to correctly say “Bibimbap” (bee-beem-bahp). Chef Lee’s Bibimbap featured rice mixed with a variety of vegetables including cooked spinach, fresh shredded carrots, and bean sprouts with Yangnyum-gochujang, a red chili pepper sauce drizzled on top. 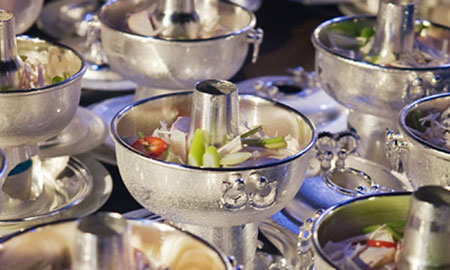 Another dish was Japchae, glass noodles made of sweet potato, with braised beef, jujube and chestnut with Bulgogi sauce. The salty yet sweet Bulgogi sauce infused into the beef and glass noodles, making every bite filled with the delicious flavor of the sauce.

Buckwheat tea was a nice complement at the end of the meal. 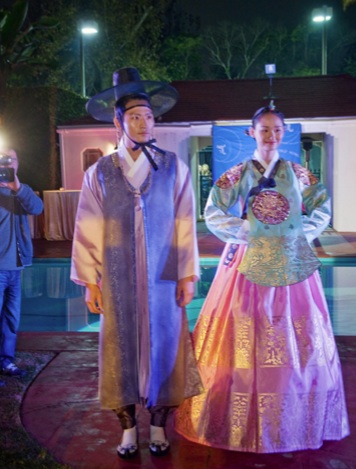 Guests were treated to a fashion show of exquisite Hanbok gowns, the Korean traditional dress worn at celebrations and traditional festivals. Both traditional Hanbok and modernized Gae-ryang Hanbok were modeled. A Hanbok includes a Jeogori, a short blouse-like shirt with sleeves, and Chima, a long skirt usually with a Sokchima, an underskirt or petticoat which gives the skirt its full, rounded shape, elegantly flowing to the floor.

Under the golden glow of the Asia Society’s distinctive Leogryph logo projected on the pool and wall of the Korean Consul General’s residence, the inaugural Asia Society Korea Center Hansik dinner on the final night of the Korean Wave Initiative provided an ideal setting for a cross-cultural introduction to the finest in Korean entertainment, pop culture, food and fashion and for fostering new relationships between leaders of U.S. and Korea’s entertainment industries.

Visit our Homepage at AsianConnections.com to view more images of the Korean Wave Initiative!

About the Asia Society:
Asia Society is one of the leading global and pan-Asian organizations. It works to promote understanding between the United States and Asia, and aims to strengthen relationships among its people, leaders and institutions across the fields of arts, culture, policy, business and education.