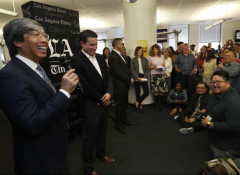 For Every Drop of Rain That Falls, a Flower Grows

Loni Ding got a wonderful sendoff the other day in San Francisco. It was a brilliant, beautiful day, perfect for a celebration of a beloved pioneer filmmaker and community activist.

An old calendar of mine tells me that I had dinner one evening in 1968 with Loni. That would be when I was doing a little work for East-West, the bilingual weekly in Chinatown, and Loni, a native of the neighborhood, worked with youth groups, many of whom were looked on with suspicion by the establishment.

The next thing I knew, I was at Rolling Stone, and she was making documentaries, always with an eye on people she thought were under- or misrepresented in American media. Her documentaries included Nisei Soldier and The Color of Honor: The Japanese-American Soldier in World War II.

Since no one can make a living doing documentaries, Loni was also a pioneer teacher in the Ethnic Studies department at U.C. Berkeley. She was also a vital part of the creation of NAATA, now known as the Center for Asian American Media. She produced the Ancestors in the Americas series, broadcast on PBS in 1996 and followed by Chinese in the Frontier West.

In short, she was something.

And a packed room at the Green Street Mortuary in North Beach – actually, the crowd spilled into the aisles and outside the chapel – let her know it. Judge Julie Tang presided, and a parade of family and friends extolled her to the heavens. Her husband, David Welsh, a singer, told about her upbringing in Chinatown and in the Mission District, where her parents had opened a second herb store. Later, he joined the Freedom Song Network in joyous songs, some of the lyrics rewritten for Loni, who died February 20 at age 78.

Loni, we were reminded, was a filmmaker, but never thought of herself as an artist. She kept the focus on her subjects, and on the work she...

A Parade for the Tiger (No, Not THAT Tiger!)

Our very own Ben Fong-Torres ushers in the Year of the Tiger as he co-hosts the largest Chinese New Year Parade in the western hemisphere.

It was a near-perfect parade, and that was the problem. I'm writing, of course, about the San Francisco Chinese New Year Year Parade, which roared and firecrackered its way through a mile and a half of city streets and about 500,000 spectators on February 27.

Once again, I got to co-anchor the telecast on KTVU, which was covering the two-hour parade for the 23rd year. It was my 14th time around, and my tenth with news anchor Julie Haener. Most years, if memory serves, we've fallen behind on time, for one reason or another, and hurried to end on time. At least once, we went a half-hour over.

This time, the parade went so smoothly, one contingent after another, with barely a lag, that Julie and I rarely heard the director telling us to stall for time while he waited for the next group to get into the TV zone.

Thus, the problem such as it was. I had prepared a dozen or so fillers, things to talk about for just those dead moments. Not just the trivia about Chinese new year rituals and customs, or why red is a big color, or why those 12 particular animals popular the lunar zodiac. It was more topical stuff, and, in some cases, personal things. I did wedge in a couple of the obligatory shout-outs to family, and especially to the youngest: grand-nieces Maggie and Stella Pavao; grand-nephew Haden Berlinsky. Also, the annual relaying of my mother's wishes for the new year: Everything good; everything lucky.

But there was so much that didn't get in. there was no time on television, but there is some space here on AsianConnections. (By the way, Suzanne Joe Kai, AC's co-founder, attended the parade with her documentary crew, and also missed out on these fillers. So, for her, for the KTVU audience, and for you, here they are.)

ANOTHER TIGER: I know, it's the Year of the Tiger, and you're...

An R rating for the Chinese New Year Parade broadcast? That is what raced through my mind when we saw the topless dancer on the Forbidden City float.

She was partly hidden by fellow dancers holding feathered fans, and when she turned around, she cupped her hands around what needed to be cupped, so she showed no more than, say, Janet Jackson or any Real Housewife.

Still, it was the Chinese New Year Parade, a beloved tradition and the most-watched parade on the West Coast, next to the Rose Parade. Performers, whether on floats or on the streets, are not supposed to show up naked.

They are also not supposed to do a lot of other things they have done, but surprises are part of the deal, and one of the reasons I look forward to it every year.

It has been a full lunar cycle, of 12 years, plus change, for me. This is my 14th year describing the parade.

I have had three co-hosts, three Emmys (all won with Julie Haener, who has been co-anchor since 2001), four directors (including Jim Haman, now the executive producer and producer), at least a half-dozen writers, and more rain, politicians and firecrackers than I can count.

It all began with a phone call in late 1996. KTVU was making a change with the parade broadcast, which, for years, had been hosted by Steve McPartlin and a parade of former Miss Chinatowns. Rosy Chu, the station's public affairs director, suggested me as part of the new team, and I was soon paired with Elaine Corral, co-anchor of the evening news with Dennis Richmond.

Just before our debut, in February 1997, Corral, the seasoned anchor, told me: This is not going to be fun. To the audience, it may look like...

It's the Year of the Tiger "insert your own joke here" and, as I prepare to co-host the telecast of the San Francisco Chinese New Year Parade on KTVU for the 14th year, I've been taking looks back to past parades, all the way back to the first one.

The memories would be pretty dim, if not for the fact that I wrote about it soon after surviving it. Having gone through two co-anchor changes (I've been with Julie Haener since 2001), and with three Emmy Awards under our belts, I find it fun to read about that first time out, in the KTVU tent on Market Street (We've since moved to Union Square).

The first explosions jolted Elaine Corral, the co-anchor of the nightly newscast on San Francisco's KTVU.

But it was just firecrackers. Workers on the Embarcadero end of Market Street were beginning the process of carpeting the boulevard with the red shreds of paper from burnt firecrackers. It was the first of many explosions to come.

Sitting next to Elaine, I was no less jittery. We were trying to rehearse for the station's coverage of the Chinese New Year Parade. Elaine, of course, is a pro anchor. But, for a co-host, she was being saddled with a first-timer: me.

Sure, I've done some time on the tube, but usually as a subject of interviews, and usually when the subject is the death of a rock star. But co-anchoring a two-hour live event? Reading from a TelePrompter? Describing floats and marching bands?

It was all new to me.

When KTVU invited me, however, I couldn't say no. After all, who doesn't love a parade? Actually, not me. At least, not live. For years, I've avoided going to the parade, far preferring to catch it on television. You can't beat having both volume and crowd control, all from your couch.

I figured that the station was looking to ramp up the Asianess, shall we say,...

Asian Elvis Has Left the Building

Asian Elvis Has Left the Building

So, after all that hype about my portraying an "Asian Elvis Impersonator" on a Spike TV show, I wound up on the proverbial cutting room floor.

I spent most of a column here on Asian Connections about it. You may have seen it, or at least saw the photo of me, in full Elvis-in-Las Vegas regalia, next to a beautiful blonde gal in a skimpy bikini. Or of me, in slightly truncated regalia (minus the high-top wig) with Bob Einstein, creator and star of the show, Super Dave's Spike-Tacular, and his buddy Larry (Curb Your Enthusiasm) David, who was also doing a cameo on the episode.

I almost wrote a newspaper or magazine piece on the experience. Fortunately, none of the publications I pitched fell for it. It would have been a disaster. I did write it up in my radio column in the San Francisco Chronicle, as well as on this site.

A week before the date the episode as scheduled to air, I decided to double-check. The only contact info I had was that of Super Dave himself, so I rang Einstein's number. He called back, sounding upset and frustrated, and told me that, after reviewing the footage, they'd cut me out of the show. I was puzzled, but far from upset. After all, I may have caused it.

Back when we shot the final scene, which was improvised to include a paintball shooting of the Asian Elvis, I was directed to act as though I had been shot, and to take a fall. I did, and, once I got home, regretted doing the scene. I called Einstein to let him know.

When he asked why, I told him that my brother, Barry, had been a homicide victim, by gunfire, in 1972, and that, even though his show was clearly a farcical comedy, and it was a paintball shooting, I felt uncomfortable about being depicted, on national TV, getting shot.

He assured me that it'd be edited so that it'd be clear that it was a paintball assault, and I wouldn't be seen falling. A few days later, he called, saying the episode was...