A punky rock song about our own Ben Fong-Torres? It's true! Read it and sing!

As many people who write books and make records are wont to do, I was Googling myself the other night. Actually, it was a variation. I was Amazoning myself, if there's such a thing. A friend had told me about finding old copies of his own books there for a penny a copy. So I went online in search of cheaper versions of myself or my books, anyway.

And that's how I happened onto a song called "Ben Fong-Torres." Not a song by me. Not a song from Almost Famous, which includes me as a character. But a tune, apparently, about me.

I couldn't believe it, but there it was. Amazon offers mp.3 downloads of some albums, so this song, from a CD called Where I Am, by Christopher Van Epps, was available for 89 cents.

I was further shocked by the original release date listed: October, 2002. This thing had been out five years and I just now stumbled across it? Maybe it was an attack on me, and nobody least of all the composer wanted me to know about it. I clicked on the "listen" button for a 30-second sample.

I heard a chorus of voices shouting my name over a combination of a polka and punk-rock beat. The words were a blur, but I made out "it's not an accident is he from south of border or from the Orient." And a robust shout of "Ben Fong-Torres is a helluva guy!"

So, despite the clumsy reference to "the Orient," it sounded like nothing to call my attorney, "Mad Dog," about.

I downloaded the song and then, why...

She loves Hello Kitty, karaoke, and a white guy. What more could you want in a novelist?

You get an idea of what Kim Wong Keltner is all about with the first sen- tence of her bio on the back cover of her first novel, The Dim Sum of All Things , published last year: In the fourth grade, Kim Wong Keltner won a cutthroat spelling bee, which encouraged her aspirations as a writer.

With Dim Sum under her belt (after a stop on the San Francisco Chronicles best-sellers list), shes published her second novel, Buddha Baby. And shes had a baby, Lucy. So, now, the authors note in the new book speaks not of an aspiring, but an established and matured author: When Kim Keltner isnt writing, she collects Chinese porcelain and plays Whack-a-Mole. She lives in San Francisco with her husband and daughter, whose first words were capybara and museum quality.

We met the other evening at Yet Wah restaurant in San Francisco, where she tried the Bens Special, consisting of fried rice with a side of almond pressed duck (and, yes, named after me. The dish, that is, not the duck). I go to Yet Wah regularly for meals and karaoke; she had her Buddha Baby book party there, and signed my copy of her book with a reference to my having sung El Paso. She mustve requested it at the party. Only thing is, I didnt do that song and, in fact, never have before. I figured I owed her one. Thus, Yet Wah.

With The Dim Sum of All Things, Kim, who is 36, made her mark as a refreshing new writer with a younger POV on... 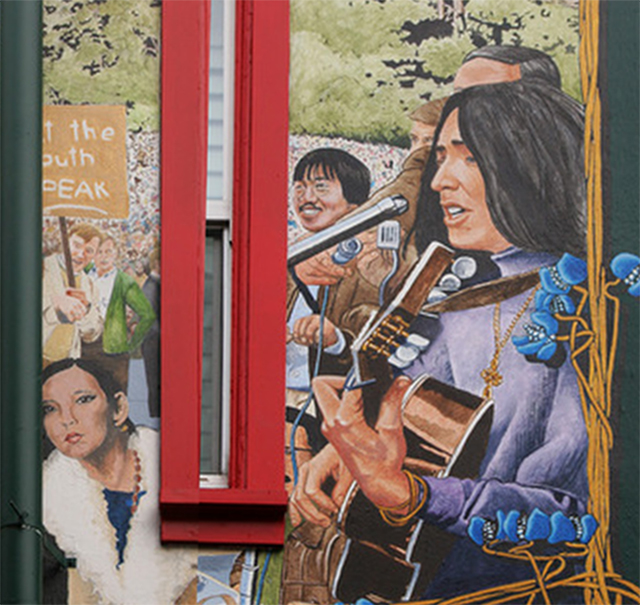 That’s how it went. Eastwood threw off the schedule, then grabbed most of the headlines, for all the...

Fun & Games with a Videocam And a Multimedia Montage Site

Ben on the Fangs and their AsianWeek publication of Kenneth Eng's 'Why I Hate Blacks' column. An apology is not enough.

Ben then joins the 'You Tube' video generation and shares behind the scenes clips of his fun prepping for and co-hosting the San Francisco Chinese New Year Parade broadcast on KTVU. Plus a session with The Doors' Ray Manzarek.

Fun & Games with a Videocam And a Multimedia Montage Site

BUT FIRST: Before the fun and games, do take a look at my colleague Bill Wong's essay on the whole controversy at AsianWeek, a paper that shouldve known better, but didnt.

As a long-time reporter and editor myself, I will add this: I agree with those who believe that higher-ups at the weekly wanted to stir up the pot. When youre a national publication, a self-proclaimed Voice of the Asian American Community, and are wallowing with a circulation of fewer than 50,000, it makes sense that you want to do somethingespecially when newspapers with ten times that circulation figure are fighting new media, losing readers and ads, and slashing budgets.

AsianWeek dismissed the writer of the offensive essay, Kenneth Eng. But until Ted Fang, the front man whos been doing all the apologizing, takes real action and fires editor Samson Wong and/or whoever was responsible for allowing the column to be published, Ill assume that hes not all that sorry about the publicity (albeit negative) that his paper has generated. The Fangs know, as well as anyone, that theres really no such thing as...

Get a Job? Who Needs a Job?

Our Ben Fong-Torres loses a job and gains a half-dozen others, from New York to San Francisco, with a stop in Cincinnati.

I lost my job a couple of months ago, and life couldnt be better.

I was just about ready to run out of the office in South San Francisco, screaming from sheer boredom with the job (VP of content at a marketing company that produced branded magazines sent out by e-mail), when the company got sold.

Yes, it was a big-salary; yes, the people I worked with were great. But spending a third of your life doing something youd just as soon not be doing is well, its something too many of us do.

And it seems as though the moment I was set free, a happy houseful of doors flew open, inviting me in for a look-see. Radio! Television! Movies! Books! Magazines! And, of course, more!

Some of these opportunities came before the downsizing at my company. Its been months, for example, since David Ling, an attorney-turned-film producer, called from New York to ask about a film option on The Rice Room, my 1994 memoirs. Weve now signed a deal, so Id advise getting in line immediately to see the film And Ive been writing, on and off, for Parade magazine since a couple years ago. Its on again, with profiles of Tim McGraw, the country superstar, and Ellen DeGeneres coming out (if youll pardon the pun) in August and September.

To check on a couple of these doors, Dianne and I went to New York in early June. Actually, we were there to go upstate, to a renewal of...