Anatomy of a Session: Inside the Studio with Larry Ching

As a writer at Rolling Stone, I have done a lot of time in recording studios. Crosby Stills and Nashs first album; Sly and the Family Stone; Ray Charles running his own control board; Fleetwood Mac; Jefferson Airplane. Richard Perry producing Carly Simon, Leo Sayer, and others. That is a lot of time. Rehearsing, recording, endless retakes, and lots of sitting around.

The Larry Ching session was completely different. We jumped back a few generations to the way records used to be cut.

AsianConnections is proud to present the adventures of Ben Fong-Torres, our very own Renaissance man: author, broadcaster, and former senior editor at Rolling Stone. Ben recently produced a CD featuring the golden voice of Larry Ching, one of the featured performers at the famous San Francisco nightclub, Forbidden City.

Larry Ching passed away on July 5, 2003 in San Francisco. He was 82, and is survived by wife Jane Seid, six sons and stepsons, and 11 grandchildren.

Larry had just been toasted at a party for his debut CD at the Chinese Historical Society of America Museum, where he received a proclamation from San Francisco Mayor Willie Brown declaring June 28 "Larry Ching Day."

The following column was written in mid-June. My next one will report on the CD party, a celebration of a life filled with fun, family and music.

Kimberlye Gold, a singing, songwriting buddy, wrote a piece for SF Weekly about the Larry Ching CD I produced. Her editor, she told me,...

Manhattan: Chow, Ciao, and Visits to TV Land - and the Summer of Love

NEW YORK, NEW YORK:
Another year, another trip to the Big Apple.
This time, Dianne and I hit Manhattan in June, when the city was weathering days in the high 80's, with occasional thunderstorms.
For us spoiled Californians, thats pretty darned hot but manageable, especially with AC in our apartment in the West Village, and in most shops. When its really hot, you spend a lot of time loitering in bank lobbies.

As always, we spent a lot of time in great restaurants. This year, they included Porter House New York, where Michael Lomonaco has rebounded. He was the chef at Windows on the World, atop one of the World Trade Center towers. Now, hes overseeing a steakhouse at the Time Warner Center on Columbus Circle. And, in a town thats pretty exacting about steaks, Lomonaco has a winner. Perfect steaks and an amazing array of starters and side dishes. The service is well-done, too. Plus, Michael plays rock guitar. What more could you want from a chef?

Because we have a friend high up in the Danny Meyer collection of restaurants, we can get tablesand didat such stellar spots as 11 Madison Parkone of New Yorks very best restaurants, according to the New York Timesand the bar caf at the Museum of Modern Art. One was fashionable; the other, fast (we were going from the Modern to see "Frost/Nixon"); both were superb. So was Craftbar, owned by top chef--and one of the stars of TV's Top Chef, Tom Collichio . Its a casual jewel of a spot. And, just...

Let’s not let the passing of Jadin Wong go without notice. For one thing, Jadin Wong thrived on being noticed. She was the essence of showbiz, as a nightclub dancer and actress.

And she’s of particular note because she was a pioneer in those fields – and not necessarily by choice. Ms. Wong was 96 when she died in New York on March 30. When, at age five in Stockton, Calif., she began expressing an interest in singing and dancing, it was 1918. She was just a little ahead of her time, and she’d stay ahead of her time when, as a teenager, she ran away from home – and disapproving parents – to pursue her dreams.

Jadin, whose name has also been spelled Jadine in posters and advertisements, wound up in Hollywood, where she tap-danced for spare change before getting some roles in films. She was an exotic dancer in the 1939 movie, Mr. Moto Takes a Vacation. She was also a natural for the Chinatown nightclubs that sprang up in San Francisco in the late Thirties, and became a star performer at the Forbidden City.

Since filmmaker Arthur Dong produced the documentary, Forbidden City U.S.A. in 1989, alumni of that club, and of other such nightspots, have gathered for reunions, fundraisers and other events. At one such gala, at the Fairmont Hotel in San Francisco in 1997, Ms. Wong was one of a couple of dozen performers who showed up. She was one of a handful selected to perform for the audience. And she was the only one who made a... 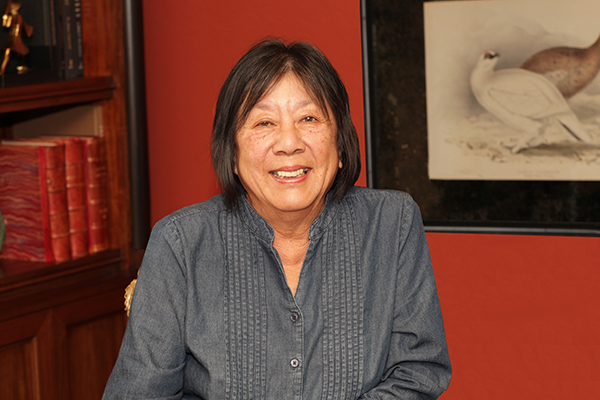 It seems like forever that it was the five of us. The five Fong-Torreses. Even after Barry died, too young, in 1972, I thought of us as five kids. Even after Sarah and Shirley...

Remembering Larry Ching, 'Till the End of Time

It was typical Larry Ching.

As producer of his CD, I had just presented him with a dinky Plexiglas plaque that displayed his CD cover and the disk itself, both showing him as the star he was back in the 1940s at the Forbidden City nightclub in San Francisco. Then, George Yamasaki, his pianist, lauded Larry and presented him with a proclamation from Mayor Willie L. Brown, declaring that day, June 28, as "Larry Ching Day" in San Francisco.

It was typical Larry Ching.

As producer of his CD, I'd just presented him with a dinky Plexiglas plaque that displayed his CD cover and the disk itself, both showing him as the star he was back in the 1940s at the Forbidden City nightclub in San Francisco. Then, George Yamasaki, his pianist, lauded Larry and presented him with a proclamation from Mayor Willie L. Brown, declaring that day, June 28, as "Larry Ching Day" in San Francisco.

In front of him, some 150 family members, fans and friends, among them a number of women who had performed with him at Forbidden City, cheered. Here at the Chinese Historical Society of America Museum in Chinatown, they had been buzzing about Larry, delighted with his latest accomplishment: recording a debut album at the age of 82. He had been showered with media attention. That very day, the San Jose Mercury News ran a long profile, written by Marian Liu and featuring a large photo of Larry back in the day, surrounded by four Forbidden beauties. My own article about the project, in the San Francisco...