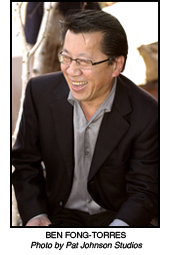 Ben wrote a song about Linsanity and performed it at a jam session in San Francisco which was streamed live online coast to coast.

A country tune for Jeremy Lin

What a difference a year makes. Last February, I wrote this little item in this space:

On the Court: Jeremy Lin, the first Asian American in the NBA, is back with the big team: The Golden State Warriors. After starting the season with the Oakland-based basketballers, he was sent to the NBA’s Development League. Now, thanks to an injury to a fellow Warrior, he’s back. While with the Reno Bighorns, Lin, a guard who starred at Harvard, played in 16 games, averaged 17.9 points, 4.7 assists and 5.6 rebounds in 32 minutes a game. He won’t get that much playing time with the Warriors, but at least he’s back. For now.

We all know what happened this February. And while the media – including Asian Connections – ran story after story about Linsanity, I wrote a song about it. A country song, at that. If you know the Hank Williams classic, “You Win Again,” which was a hit for Jerry Lee Lewis and Charley Pride, you know the tune.

I also took a shot with it at El Rio, with the jam band, Los Train Wreck. Here’s a sample.

After doing the song, I realized that, for all the attention he’s received for being the first Asian American NBA star, I make no mention of his ethnicity. It’s all about perseverance and skills.

And now, my lyrics:  (the full audio version is coming soon)

The news is out

The Knicks are hot

And all because the Kid got his shot

By now you know New York can win …

Long as they play Jeremy Lin

He rode the bench at Golden State

In Houston, too, he had to wait

Two Knicks went down, and Lin was in

From Palo Alto to Harvard ball

But not one scout gave him a call

He could have spewed profanities

Instead he started Linsanity!

The Jeremy Lin story is a dream come true.

My dream. And, I suspect, the same can be said for thousands and thousands of Asian American boys who, like me, had fantasies of one day being taller, and getting to play basketball.

I never got tall, but I did play a little ball. But even then, it was the stuff of unrealistic dreams.

I remember one year—I must’ve been about eleven, in the mid-Fifties, at Lincoln School in Oakland’s Chinatown – when I teamed with Ronald Coleman, a lanky African American friend, and began plotting a basketball team of our own. Only one of us could play, but that didn’t stop us from thinking of others to recruit for the team.

I have no recollections about just where and who we thought we’d play. Lincoln—which had a largely Asian student body—had sports leagues. Who needed an independent squad? But I remember Ronald and me going through catalogs from a local sporting goods store and looking at uniforms, and mulling names for our team, and then going out onto the playground and shooting baskets—and dreaming.

Yes, I must’ve been about eleven, because that’d be the year – 1956 into ’57 – when my father was in Reno with a restaurant of his own. With our family restaurant (the New Eastern) gone, I had some time after school (before trooping off to Chinese school) to goof around with such crazy ideas.

It never happened, of course. I went on to enjoy the game as a fan. And in middle age, I was part of an informal Saturday morning, co-ed game rounded up by a music publicist and a radio programmer at a local park. At age 40-something – and still short – I could reach back to the old days and sink a few jumpers, and execute my childhood specialty – a left hook – exulting with every swish of the net; every good bounce off the backboard, every precious point.

It wasn’t Lin-sanity. That couldn’t happen without Jeremy, and I celebrate the many points he’s made, on and off the court.

STRANGER THAN FICTION: The strangest things happen to me.

The weekend after my 16th stint as co-anchor of the Chinese New Year Parade on KTVU, I’m at the Sunset Sessions, a three-day weekend retreat in San Diego for radio DJ’s and programmers and music supervisors; people from film, TV and video production companies seeking fresh musical talent and sounds.

There are about 55 bands and artists doing showcases day and night around the Rancho Bernardo Inn, and there are panels about radio and music trends. I’m there to interview Dennis Constantine, program director of KFOG in San Francisco. I’m also enjoying the wealth of talent, plus bonus big-name acts like Jimmy Cliff, Jason Mraz and Lucinda Williams.

So what happens? I wind up on stage at a big evening showcase, doing Elvis.

This is nutty on several levels. Mainly, I’m not a singer, and should not be sharing a stage with professionals. Second, it’d be a shock for the industry pros to see this former Rolling Stone writer busting out a song.

But that was the idea, I guess. Michele Clark, the workaholic, dynamo organizer of this musical marathon, heard from a radio buddy of mine that I sang Elvis Presley songs, and made a snap decision. I’d help do roll call Saturday evening (hours after my onstage Q&A), then launch into Elvis.

She found willing accomplices in Glenn Alexander, a seasoned guitarist who was there with his daughter, Oria Aspen. (I’m guessing that’s a stage name.) They found a YouTube video of Presley performing my chosen song, learned it, and after a quick run-through, we were on stage, doing one of my favorite Elvis tunes, “Love Me.”

The music and radio pros were visibly shocked, but their applause (and even a few screams) told me I hadn’t embarrassed myself. Or did I? You be the judge. Here’s an audio clip. Also, Rita Houston of WFUV in New York shot it – the first couple of minutes, anyway – on her phone, and that may be on YouTube or elsewhere online by now.

Afterwards, various people asked for autographs and photos. KHUM, from Humboldt, Calif., requested that I do a station liner, on the spot. I had to hire a bodyguard. Hey, it’s not easy being a dead yet beloved rock star.

HIT PARADE: Regarding the Chinese New Year Parade: Not much to say; it was spectacular, this being the Year of the Dragon. The telecast went swimmingly, and the highlight, for me, was a marching band that performed “Dynamite,” the Taio Cruz hit. What next—Kate Perry? Yep. They do her songs, too. Teenage Dreams do come true…

AsianConnections columnist Ben Fong-Torres is a true Renaissance man. The former Rolling Stone writer and editor is also a multiple Emmy Award-winning broadcaster, writes a column Radio Waves in the San Francisco Chronicle, and is the author of many books, including his two latest ones: thee expanded and updated edition of his 1994 best-seller The Rice Room: Growing Up Chinese American from Number Two Son to Rock 'n' Roll published by University of California Berkeley Press, and Eagles: Taking It to the Limit, an insider's look at arguably the greatest American rock 'n' roll band on the occasion of their 40th anniversary published by Running Press.

Ben Fong-Torres' The Rice Room: Growing Up Chinese American from Number Two Son to Rock 'n' Roll, re-released in Fall 2011 with an expanded and updated edition with additional photographs by University of California Press, was an instant best-seller when it was originally published in 1992.

Ben Fong-Torres is interviewed about his new book on CBS San Francisco Eagles: Taking It to the Limit

Footnote: More of Ben's previous columns will be posted in an online archive soon as AsianConnections.com completes work on its new website system!