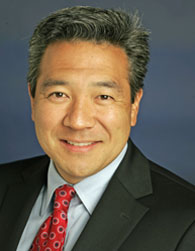 Tsujihara, 48, the twenty year Warner Bros veteran was named CEO on Monday and is expected to take over the post March 1.

He has been president of Warner Bros. Home Entertainment since its founding October, 2005. He has managed the studio's DVD business, as well as a range of responsibilities outside of the television and movie business helmed by other divisions, from games acquisitions and content distribution via VOD and other digital platforms.

Tsujihara received his BA in business administration from Universiaty of Southern California, and an MBA from Stanford University.

Its been reported in the news media that Tsujihara has a humble and low-key management style, and was considered a "Black Sheep" of the list of likely candidates for the CEO post. Current chairman Barry Meyer, told LATimes.com "Everyone needs a leader, and Kevin was the best equipped to unify the company at this time." We just thought he was the best for the whole company."

He is the son of chicken farmers in Petaluma, California, and grandson of Japanese immigrants. When he becomes CEO on March 1, he will be the fifth CEO in Warner Bros. 90 year history, and the first Asian American to run a major Hollywood studio.