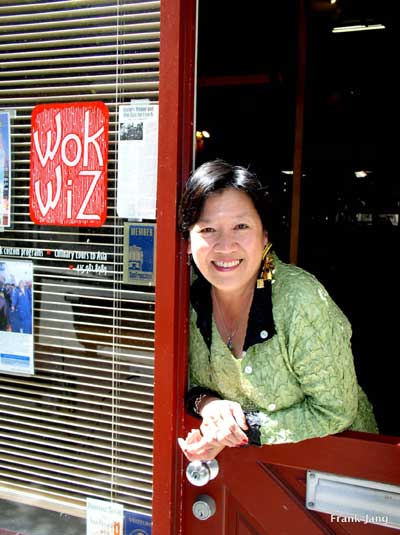 My sister, Shirley Fong-Torres, who died June 18, 2011, was celebrated at a private memorial event on July 24, 2011 at one of her favorite restaurants, Yank Sing in San Francisco.

During the evening, I introduced eight speakers, including family members, good friends, a tour guide at her Chinatown tour company, Wok Wiz, chef Martin Yan, and CBS5 (KPIX-TV)’s Liam Mayclem, representing her many friends in the media.

The following are my remarks, which were interspersed with the various speakers.

Welcome, friends and family. We are here to remember our dear friend, sister, aunt, mother, grandmother: Shirley. On behalf of our family – Fong-Torres, Watkins, Pavao, Berlinsky – I thank you for joining us.

… I had a dream about Shirley last night. She was guiding a tour group around Heaven. And at the end of the tour, they all bought copies of her book. Pretty sweet.

Well, one sympathy card said it all: It’s always too soon.

And one word said it all, about Shirley. It came up in the CBS 5 news report of her passing. She was, the anchor said, a Bay Area “treasure.” In facebook messages and emails, the word kept popping up. She WAS a treasure, of Chinatown, the Bay Area, and around the country and the world, wherever people enjoyed learning about Chinese food and culture.

The first report on SF Gate.com, by Jeanne Cooper, spoke of her love of all things Hawaiian. One of our speakers today, Martin Yan, may tell you about adventures in Hong Kong.

My friend Tom Gericke wrote from Sydney to say that Keith Floyd, a food and travel personality Down Under, mentioned Shirley in his writings. Sure enough, in a book about his travels through the U.S., he wrote about “Shirley Fong-Torres, fluttering like a brightly colored butterfly through the bustling streets of Chinatown, flitting from cookie factory to tea emporium to dim sum palace, explaining, joking, greeting friends—half in Chinese, half in English, without drawing a breath.”

Yes, she was a treasure to those who worked with her. But she was, first, a treasure in our family.

We were a restaurant family. Oakland in the Fifties; Hayward in the Sixties. Barry, Shirley and I, and later Burton, were the ones who, unfortunately, were teenagers in those years, and therefore required to work at the Bamboo Hut, six days and nights a week, through the summer and around the year. Often it was just Shirley and me in the dining room, waiting on tables, bussing dishes, cashiering, making the worst coffee in the country – one pot, and we’d keep adding water to it all day – and we’d laugh about it, because we didn’t much care to be there. After all, we were working for nothing – there seemed to be a law against tipping in Hayward -- and we lost out on all the things our classmates were doing in school, after school and on weekends.

We’d get angry when customers showed up just before closing time. We made fun of certain customers, like the old man who’d stomp in, sit down at his seat at the counter and shout, “GOT APPLE PIE?”

I said that at her at her bedside, near the end, and she responded with a grip of my hand. Funny, how a silly phrase from 45 years ago, shared with a buddy or a loved one, stays with you, and gets a response: no matter what.

… All of us fled from the restaurant life swearing we’d never get into the food business. And Shirley did return. But not right away. First, she mixed college – at what was Hayward State – with her responsibilities at the Bamboo Hut. And then she was off to Cal Berkeley.

Soon after graduation in 1968, Shirley met and married Richard Dong, an architect. When he was called to active duty in the U.S. Army, they moved from Oakland to El Paso. There, Shirley did some teaching at a private Catholic school. They returned, Rich got a job with Naval Facilities in San Bruno while Shirley was a secretary at Kaiser Engineers in Oakland. She gave birth to Tina in Oakland – at Kaiser, of course—and the family settled into Pacifica.

It was in Pacifica that Shirley, who, along with me, had grumbled about having to peel prawns and shell peapods and wrap won tons while our friends were going to sock hops and discovering alcohol, returned to her restaurant roots. Well, not to a restaurant, but to Chinese cooking—teaching it in a program of Pacifica’s Parks, Beach & Recreation Department. She was a natural, and, soon enough, her thoughts turned to San Francisco’s Chinatown.

… Shirley founded the Wok Wiz Chinatown Tour Company & Cooking Center in 1985. The cooking school was on Commercial Street; the tours were all over Chinatown, not only Grant and Stockton, and Jackson and Washington, but the alleys and places tourists never saw. As the years progressed, she wrote in her book, SF Chinatown, a Walking tour, “my goal for our tours became clearer: to promote cultural understanding of the people of Chinatown.”

As the years progressed, Wok Wiz became one of the most popular tours in the city, and Shirley’s staff grew, with tour leaders ranging in age form 30 to 70-something, but all reflecting Shirley’s mission.

She had fun. I got a note from Ken Reuther, who used to be in the record business, then became a tour guide. He said he often ran into Shirley in Ross Alley, and, he wrote, “it was always a joyful and happy experience to see and talk to her. She told me a joke before Chinese New Year that I will tell every Chinese New Year; and remember her when I do so.

"Gung Hay Fat Choy," but if you are a vegetarian it's "Gung Hay Bok Choy!"

Shirley published 4 books, from Wok Wiz Chinatown Tour Cookbook to The Woman Who Ate Chinatown. She was honored that, for two of those books, Martin Yan agreed to write the foreword.

… Shirley’s ease as a tour leader and cooking teacher made her a natural on the air. Around Chinese New Year, you could see and hear her everywhere, from Don Bleu to Rosy Chu, from Gene Burns and Narsai David to Henry Tennenbaum and Jan Wahl.

Over the last 15 years or so, I’ve been co-anchor of the Chinese New Year parade telecasts…She would host the Wok Wiz Lunar New Year Gala in Chinatown, and, on the air, whenever possible, we would plug each other. What sibling rivalry? We were bonded by media as well as family loyalty.

…It was in early April that Shirley told her family that she’d been diagnosed with leukemia, and, in an e-mail, asked, “Who knows why things like this happen?”

From that first troubling diagnosis, through the tests and procedures, through a bit of positive news, and to the end, Kim Spangler was there. Kim Spangler became a buddy about ten years ago. She put up the facebook page that drew hundreds of messages of support and prayer.

Now, we come back to the family, to Shirley’s loving daughter, Tina, and her husband Matt. I’d like them to know that I got a note from Mayor Ed Lee. He wrote, “Shirley was a very special woman who touched many people’s lives. She will truly be missed.”

… In June she was back at Kaiser Permanente. Two evenings before the end, Dianne and I visited…She was supposed to be awake, but pain medications had lasted far longer than expected. Doctors and staffers shouted at her, trying to awaken her to be able to drink, and to get more treatment. Nothing worked. Tina shouted at her.

I took a turn, held her hand, and tried to make her do one of her favorite things: laugh. I mentioned the disgraced Senator, Anthony Weiner. I said she had visitors from Wheel of Fortune, Pat Sajak and Vanna White. I sang “Shirley Shirley bo-birley bo-nana fanna fo-Mirley…Shirley!” and I felt her grip. Maybe she was telling me to stop. But the GOT APPLE PIE line got another grip, and a smile. She said something. Something like, “Love you, brother Ben.”

We gathered there the next evening, and then again on Saturday late morning. Tina and Matt were told that it might be time for a final blessing, if they wished. They did, but, it being the weekend, there was no minister in the building. Finding one might take a few hours. In the ICU waiting room, I raised my hand. Back in 1969, I spent $3 to become ordained by the Universal Life Church. So, while I scribbled down a few lines, Matt got a couple of prayers by email from his father, Tom, who’s an actual priest. He showed them to me on his phone. I used most of one prayer, took a few lines from another, and, soon, Tina and I were at Shirley’s bedside.

I’m not going to read it right now. I’ll just say that Shirley was blessed, in more ways than one, and that, in the end, she was free of pain and in peace, surrounded by some of the many who loved her. In the end, that’s what will sustain us. It’s a sentiment in a card, but it’s true: Life is a blend of love and loss, but love is always stronger. Love lives on forever.

That will be true of Shirley, just as it has been, for years, of our dad, Fong Kwok Seung, and our brother, Barry, who Shirley adored. Today, looking out at the many lives she touched, I’m confident: Love lives on forever.