Photo Credit: Tuna Canyon Detention Station Facebook Page Photo credited to David Scott, the Scott Family, and Little Landers Historical Society. David Scott is the grandson of Merrill Scott who was the superintendent of TCDS. Photo circa 1941-1943. The structures were removed, but the oak and sycamore trees dating back to World War II still live on this site.  June 25, 2013 UPDATE: Los Angeles The Los Angeles City Council voted unanimously to support an amending motion by... 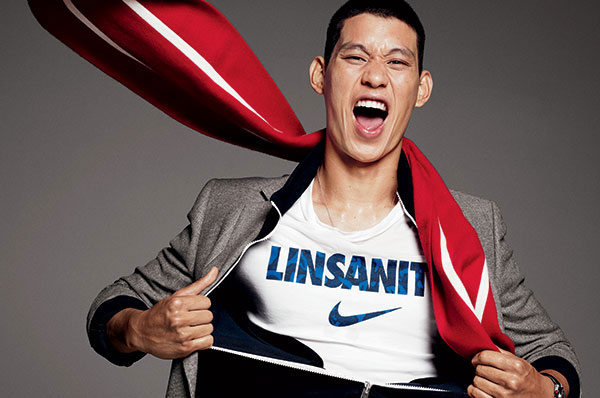 Warriors players will wear specially designed Adidas shooting shirts on Friday, February 8 against the Memphis Grizzlies and Tuesday, February 12 against the Houston Rockets. Designed and developed by... 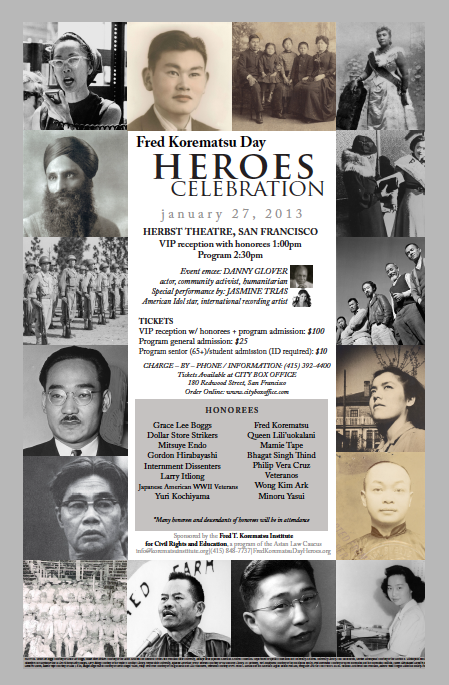 WHAT: The Korematsu Institute celebrates Fred Korematsu Day 2013 by honoring 16 American civil rights heroes who’ve been long overlooked (see list below). This will be a historic gathering of civil rights heroes and the descendants of heroes who have passed on. The event also features celebrity emcee DANNY GLOVER, as well as a special performance by American Idol star JASMINE TRIAS. 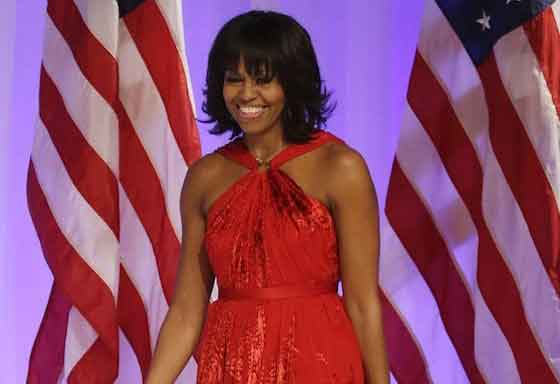 If you are as talented as designer Jason Wu, lightning can indeed strike twice to your career. First Lady Michelle Obama arrived to the Commander-in-Chief inaugural ball last night wearing his stunning ruby red gown, marking the second inaugural she chose to wear one of his creations. From the homepage click here to view Jason Wu's full length inaugural gown.

In 2009, at the first inaugural she surprised fashinistas by wearing a gown he designed, a flowing cream-colored shoulder-baring confection. Jason, then a 26 year old rising-star designer had submitted his dress he had created for her consideration, just as other designers have customarily done. In 2009, the moment First Lady Michelle Obama appeared in Wu's ball gown, was the moment his already fast-rising career launched into hyperspace.

Mrs. Obama appeared in Wu's flowing, belted chiffon and velvet red gown as she joined her husband onstage for their first inauguration dance at the Commander-in-Chief Ball. Wu told the New York Times, "I'm still floating." "It is a big surprise. The White House kept us pretty clueless until five minutes ago."

Wu was born in Taiwan, moved to Canada when he was 9 years old, and graduated from boarding schools in the U.S. He attended Parsons The New School for Design in New York City.

It is an honor for a fashion designer to create an inaugural gown worn by a First Lady. Wu's ruby red inaugural gown is now planned to go to the National Archives. Mrs. Obama's 2009 creamy-white inaugural gown designed by Wu was donated to the Smithsonian.

"Tonight, our country has lost a true American hero," said President Barack Obama. Senator Inouye was the second longest serving senator in the U.S. and was awarded the Medal of Honor for his World War II heroics.

He was a member of the U.S. Army's 442nd Regimental Combat Team, the most decorated unit in U.S. history.