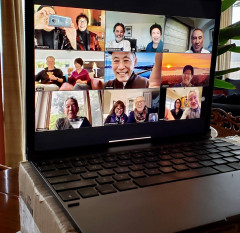 The Year of Sheltering Dangerously By Ben Fong-Torres   Well, hasn’t THIS been a fun 365? As we approached the anniversary of the shelter-in-place orders for the San Francisco Bay Area, on March 16, I thought of some of the changes we’ve been through.  In February, our calendar was packed with restaurant dinners and a large, loud gathering at Harbor Villa, saluting our friend, the civil rights attorney Dale Minami. And there was my 24th time as co-anchor of the...

Women who have breast cancer before age 50 and who have few female relatives on one side of their family tree should be considered candidates for genetic testing for cancer genes, say a team of researchers at City of Hope. Their research challenges the accuracy of some breast cancer prediction models that do not take family structure into account. Their findings appear in the June 20 issue of the Journal of the American Medical Association.

Most physicians agree that genetic testing for genes linked to breast cancer, including mutated BRCA genes, is not recommended for the general population without cancer, since the risk of carrying such a gene is low - about one in 800. Predictive models that are currently used to estimate the likelihood of a breast cancer gene mutation to determine who should receive genetic testing rely on family histories. Some testing guidelines suggest genetic testing in women with at least two or more first-degree or second-degree relatives with related cancers. However, opinions differ over recommending testing for women with no family history of breast or ovarian cancer who develop breast cancer at an early age.

The researchers, led by Jeffrey Weitzel, M.D., director of the Department of Clinical Cancer Genetics at City of Hope, have found that women who had early breast cancer and no first-degree or second-degree female relative who lived past age 45 on either...

Inside the Angel Island Immigration Station

The U.S. Immigration Station on Angel Island, which has been on the annual list of America's 11 Most Endangered Places since 1999, re-opened after more than three years of restoration and preservation work on February 15, 2009. The Angel Island Immigration Station Foundation (AIISF), the nonprofit partner of California State Parks and the National Park Service, along with Save America's Treasures and American Express Partners in Preservation, two of the National Trust for Historic Preservation's valued partnerships, contributed
much-needed funding in the efforts to preserve, restore and interpret the historic immigration station, which is now open to the public for tours.

In recognition of Asian Pacific American Heritage Month, I am sharing this article I wrote about my grandmother's experience being detained at Angel Island, which appeared online in the September 19, 2000 edition of A. Media, Inc.

"My name is Lee Bak Huen. In 1937, I was 15 years old when Japan bombed China and many of the people in my grandmother's village were killed. At the time, my father, brother and two sisters lived in Locke, Ca, and my father sold clothes to farmers to support us. Fearing for my life, he sent my passport and a booklet that detailed everything about my family and my home for me to study. He managed to scrape together $300 Hong Kong dollars, enough for third class passage on the SS President Hoover. My journey from Hong Kong to San...

What's in store for the Year of the Wood Rooster?

After the unpredictable Year of the Monkey with its horrendous surprise ending with the Asian earthquake and tsunami, most of us are ready for the new year of the Rooster which begins on February 9, 2005. The element of wood remains above that of metal during this year, portending a continuation of disharmonious relations on the international front but with hope. Because wood is more flexible, there will be fewer serious confrontations than last year and more opportunity for resolution.

During this year, the most dreaded of the 3 Afflictions, the 5 Yellows, resides in the NW so if your front entrance is facing 292.6 degrees to 337.5 degrees, find and use another entrance into your home so as not to activate this direction. Hang your pagoda windchime outside close to the front door for protection from serious illness, accidents and calamities to your household.

Do not face West when you are working this year of the Rooster (even if you are a West group person and it is one of your four best directions) where the Grand Duke Jupiter rests. To do so will only bring frustation and a feeling that you are struggling but not making progress. For East group people, it is good to face East as you will have the support of the Grand Duke behind you. The 3 Killings is in the East this year and you can face it, but not have this direction behind you.

The Rooster symbolizes the liver,...

Lt. Dan Choi was arrested April 20, 2010 after he chained himself with other gay rights activists to the gates of the White House to protest the policy on forbidding gays and lesbians from serving openly in the Armed Forces.

AN INTERVIEW WITH
LIEUTENANT DAN CHOI

In his State of the Union address to Congress, President Obama promised to end the 'don't ask, don't tell' policy, which forbids gays and lesbians from serving openly in the Armed Forces. Three months later, efforts to repeal the policy continue to languish in Congress. But when Lt. Dan Choi, an openly gay New York National Guardsman, wanted to protest the policy, he didnt take it to Capitol Hill, but instead chained himself to a White House fence, where he was arrested March 18. Choi spoke with NAM editor Aaron Glantz about his arrest and his opposition to dont ask, dont tell.

Why did you chain yourself to the gates of the White House?

Pres. Obama has the authority right now to demonstrate leadership. The president has made clear that he wants to see dont ask, dont tell repealed and the only way you can see repealing this through Congress is for the president to take executive leadership. We needed to make that message loud and clear.

In March, you came out as openly gay on the Rachel Maddow show, but now you have been recalled to drill with your unit. How is that possible?

SF Hep B Free Ad Campaign Asks "Which One Deserves To Die?"

Recent data released from the National Cancer Institute confirms that San Francisco has the highest rate of liver cancer in the nation. It is the gateway for immigrants from Asian countries where there is a high prevalence of hepatitis B. San Francisco Hep B Free is a unique collaboration of over 50 private and public organizations whose goal is to turn San Francisco into the first hepatitis B free city nationwide.

For the 15th Anniversary of National Hepatitis Awareness Month in May, SF Hep B Free will launch "Which One Deserves To Die?" a provocative ad campaign alerting the public that 1 in 10 Asian Americans is chronically infected with hepatitis B compared to 1 in 1,000 in the general population. Hepatitis B infection causes up to 80 percent of liver cancers worldwide. The ad campaign was produced pro bono by DAE Advertising, a leading Asian American advertising agency based in San Francisco. These...