May 30, 2011 What a great way to end a terrible month. Here it was, Asian Pacific American Heritage Month, and I spent most of May with a cold, a bout of laryngitis and general misery. But I saved up energy for a couple of events, including a birthday bash for my pal Sherry Hu, the veteran reporter at KPIX-TV (“CBS 5”) who just retired after 34 years there. She and husband Karl Nichols chose to celebrate with about 60 friends at the Silver Dragon restaurant in Oakland. And at our...

Being 'Asian' is an advantage says Jeremy Lin

"I think the advantage of being an Asian basketball player in America is that no one expects anything from you, and no one thinks you are going to be good," Lin told a press conference in Taipei. Give it to Lin to say it how it is. And good luck on the next chapter of your amazing career, Jeremy.

And if you are not one of the thousands of viewers of Jeremy Lin's Skype chat this week with a 5 year old named Naim and his family check the link out below. Naim was reportedly devastated by the Knicks decision to not match the Houston Rockets offer.

When time came for the Skype chat with Jeremy, young Naim was nearly speechless. Most telling is Lin's attention and patience to chatting with Naim and his family. With the awkward silence waiting for 5 year old Naim to chat with Jeremy (Naim barely made a peep), and with Naim's parents filling in the silence with chatter, a typical phony-baloney big-headed basketball star would have said thanks and good bye. But Lin seemed to be sincerely interested in having a conversation with young Naim and his parents and gave the family quality time. Kudos to Lin for being a class act.

Here's a link to Jeremy's chat with Naim and his family. (click on the full story headline for the link to activate).

Its Houston for Jeremy Lin - The NY Knicks let him go

(Video image by Suzanne Kai was taken at a press interview with Jeremy Lin in the New York Knicks locker room at Madison Square Garden March 11, 2012) 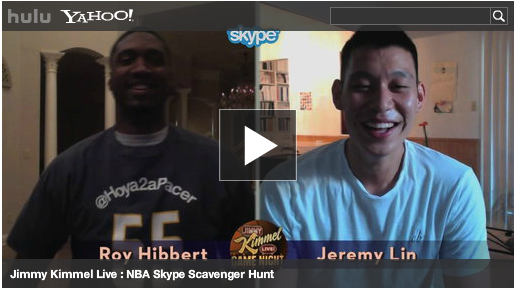 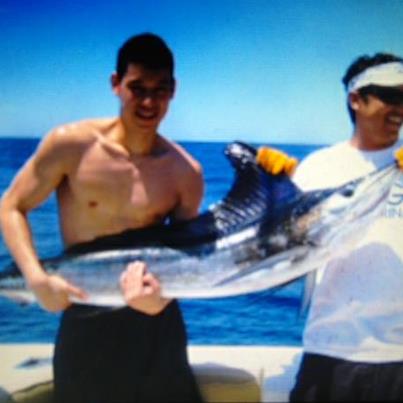 Jeremy Lin reported on Saturday June 2 on his Facebook page that his knee is healthy and he's ready to start training again. His Facebook page shows a happy Lin holding a freshly caught marlin, which he caught and released on a vacation in Cabo San Lucas, Mexico. Photo credit: Jeremy Lin's Facebook page

Jeremy Lin continues to recover from his left knee surgery but
due to pain felt in his knee after his first one-to-one practice
drill, he's not likely to return before Game 4 at the earliest.

On Saturday, the New York Knicks point guard participated
in his first one-to-one drills since he had surgery April 2 to repair
a meniscus tear in his left knee.

Doctors have estimated that it would take six weeks
from the date of his surgery before his knee is recovered
enough to play basketball. His rehab has been encouraging
also he has reported soreness in his knee yesterday
after his one-to-one practise.

Last week he tweeted when he started jogging:

Meanwhile, Jeremy's star is not fading off the court,
he was just named to the #1 spot on Time Magazine's annual list
of The 100 Most Influential People in the World.
Time's list is on the newstands now, its the April 30, 2012 edition.

You will want to pick up a copy of Time Magazine's The 100 Most
Influential People in the World issue just to see the magnificent photo
of Jeremy airborne with a basketball in the palm of his right hand,
his left arm deftly blocking his opponent as he prepares to score
another point for his team.

Also, there's a short companion essay "The dreamers' Most Valuable Player"
written by Arne Duncan, the U.S. Secretary of Education saying much of
what all of us have been marveling about over Jeremy Lin.

In a world dominated by individuals flounting 'success' through bling and
glamour, its the individual...