May 30, 2011 What a great way to end a terrible month. Here it was, Asian Pacific American Heritage Month, and I spent most of May with a cold, a bout of laryngitis and general misery. But I saved up energy for a couple of events, including a birthday bash for my pal Sherry Hu, the veteran reporter at KPIX-TV (“CBS 5”) who just retired after 34 years there. She and husband Karl Nichols chose to celebrate with about 60 friends at the Silver Dragon restaurant in Oakland. And at our...

Look up show times and purchase your tickets today

by clicking on the city of your choice.

Take a look at the trailer HERE! 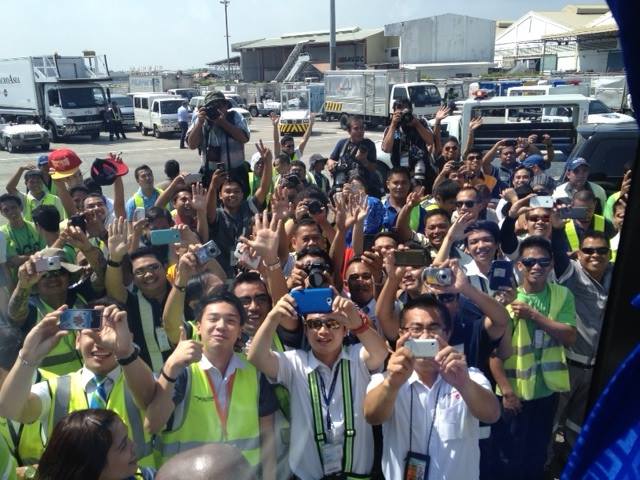 As "Linsanity" the documentary screens in the U.S., Jeremy Lin was met by fans as he arrived yesterday to the Philippines for a Houston Rockets preseason game. Fans greeted Jeremy as he was on board a bus at the Ninoy Aquino international Airport, south of Manila. Photo credit: Jeremy Lin's Facebook page.

Go see "Linsanity" the documentary about Jeremy Lin! Bring your friends and family. Show Hollywood that a film about an Asian American can be a box office success! It is in select theaters in limited release.  Every single person who buys a ticket and goes to see "Linsanity" right now counts.

Hollywood is a business, so please buy a ticket and go - now. Movie executives will look to the box office receipts, and will decide how many screens and how long the documentary will continue to be shown in theaters.

Click on the links below to find the closest theater, buy a ticket and go!

This reminds me of another film back in 2002-2003. Ten years ago - that seems like a long time in our digital world, but not so long in the movie industry. It was not a documentary, but a fictional feature film called Better Luck Tomorrow, directed by a then relatively unknown director named Justin Lin. Like Linsanity, the film screened at the Sundance Film Festival. When the film was soon to be distributed, Justin Lin asked for ground support to help encourage people to go out and buy tickets to see his movie Better Luck Tomorrow. We were among his hundreds of unknown, unnamed volunteers. We were on a mission. We also knew that if Justin's movie flopped at the box office, it could be a set-back for Asian American cinema.

Since it was pre-Facebook and pre-Twitter social media days, I remember grabbing friends to volunteer to do an old school street team effort to get the word out about Justin Lin's film. We bought tickets, posted stories online, made phone calls, and put up flyers and posters. Our writer/editor Lia Chang in New York did an interview with Justin Lin.

So, here we are again. Buy a ticket and go - and tell your friends and family to do the same.  By doing so we will collectively send a message to Hollywood that films about an Asian American can be a box office success!

Members of the founding team of RottenTomatoes.com, a movie review site which I also helped in varous capacities also pitched in. RT was the brainchild of Senh Duong, his founding partners Patrick Lee and Stephen Wang, and founding team members Paul Lee, Binh Ngo, Wilson Wang, Susan Nakasora, Lily Chi, Mark Moran and Pungkas "Pongky" Nataatmaja. As you can probably tell from their last names, many of the staff just so happened to be Asian American, and had an affinity to supporting Justin Lin's film, and Asian American cinema.

RT's members also supported projects like this website which launched to help fill the void of stories that needed to be told about Asian Americans and the Asian American communities that never got covered in the mainstream press. In the early years, before RT was acquired by corporate media, RottenTomatoes.com hosted and managed AsianConnections.com on its servers, RT team members Paul Lee and programmer Pongky Nataatmaja, and others, managed the website with me, and wrote the original code, so I could devote more time to bring in ad contracts and produce video features from Hollywood for RottenTomatoes.