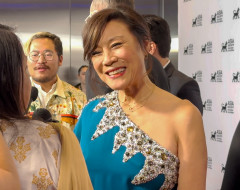 Los Angeles October 30, 2022 By Taylor Yukiko Sato and Suzanne Joe Kai   The 2022 U.S.-Asia Entertainment Summit was a historic event that brought leaders from Hollywood and the Asian entertainment industry to Los Angeles.  Janet Yang, Chair of U.S.-Asia Entertainment Summit, was honored with the 2022 Career Achievement Award. Janet made history as the first Asian American, and fourth woman to become the President of the Motion Picture Academy of Arts and Sciences....

From May 4-8, 2011, the Indo-American Arts Council (IAAC) presents the 11th Annual New York Indian Film Festival (NYIFF), the oldest and most prestigious Indian film festival in the country, with 25 feature films, documentaries, and shorts from and about the Indian subcontinent screening over five days. NYIFF features a mix of film screenings, discussions, industry panels, nightly parties, an awards ceremony, and gala red carpet events.

The U.S. premiere of Disney’s Do Dooni Chaar directed by Habib Faisal and starring Rishi Kapoor and Neetu Singh, kicks off the New York Indian Film Festival with a star-studded Opening Night red carpet at the Paris Theatre in Manhattan, followed by a gala benefit dinner at the Jumeirah Essex House. H.E. Meera Shankar, India’s Ambassador to the United States, will deliver the welcome address. Film festival screenings will take place from May 5 through May 8 at Tribeca Cinemas, including the Centerpiece selection – the New York Premiere of Aparna Sen’s Iti Mrinalini , followed by an afterparty at Tribeca Bar. The Festival’s Closing night selection, the U.S. Premiere of Rituparno Ghosh’s Nauka Dubi, will screen at Asia Society followed by the annual awards ceremony and afterparty. In addition, the festival is hosting an exclusive celebrity-filled celebration honoring the 150th anniversary of the birth of India’s legendary Nobel Prize-winning artist and poet Rabinranath Tagore at Asia Society on May 8.

Jeremy Lin is a 'Marked Man' in the NBA 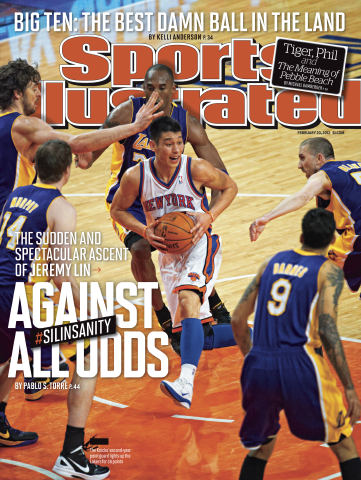 Jeremy Lin is a marked man in the NBA. Whether an opposing point guard or marketers, all want a piece of him.

The New York Daily News reports Lin said on Friday “I don’t know if it is me or maybe the Knicks." “Maybe all of us. I don’t know. But teams definitely come after us and play hard against us. We’ve had a little bit of media attention and that may have a little to do with that.”

All that attention, however, has its drawbacks. After Lin was manhandled by the Miami Heat two weeks ago, Carmelo Anthony told his teammate that he was now on every team’s “scouting report.”

Lin was roughed up by the Dallas Mavericks on Tuesday — the same team that he had torched for 28 points and 14 assists 10 days earlier. In fact, Jason Kidd floored Lin with a hard foul to the head. Mike D’Antoni argued that a flagrant should have been called and instead the head coach was whistled for a technical.

The greatest thing about Linsanity is that Jeremy Lin can win, he can lose, but he has already achieved the near impossible. In just a few short weeks, he's turned a country on its head and made it examine how...


This year’s festival is themed around the journey that Asian Pacific American ancestors have taken to bring us to this moment that celebrates not only the value of families but also our heritage in the combining of the traditional and very colourful culture across the continent of Asia that make us proud to be Asian Pacific Americans. The festival will feature fun activities for children and adults, savory samples of Asian cuisine, booths representing local Asian American organizations, and an impressive lineup of musical artists, dance presentations, martial artists, taiko drumming groups and magicians. For more details on the event, click here.

In the Locker Room with Jeremy Lin

I spent the day today watching a Knicks game. This time it wasn't on a television screen from California but up close, live and in person at Madison Square Garden in New York City.

I was on the court, literally, at today's pre-game practice, behind the scenes embedded with veteran sports reporters, at the pre and post game press conference with the coach, and yes - in the locker room with Jeremy Lin.

Stay tuned soon for our feature on Jeremy Lin, Mr. Linsanity himself. Meanwhile, we have posted a few photographs from today.

The greatest thing about Linsanity is that Jeremy Lin can win, he can lose, but he has already achieved the near impossible.

In just a few short weeks, he's turned a country on its head and made it examine how Asian Americans are viewed in the mainstream.

As we watched him in person today, we saw a very talented 23 year old basketball player with a great career ahead of him.

We also thought of the historical milestone he has already achieved - for all of us.

Video screenshots are below.


One of the foremost names on the American wadaiko scene, Kenny Endo, returns to Tokyo for 2 engagements on April 24 at Shibuya’s O-West and on April 30 at Minami Aoyama’s “Mandala.” The concert at the Mandala is called “Mitsudomoe – Mind, Body, Spirit.”

Born and raised in Los Angeles, Endo began early training in western drums and percussion. He began his taiko career with the first two kumi-taiko groups established outside of Japan – L.A.’s groundbreaking Kinnara Taiko, and then with the renowned San Francisco Taiko Dojo. In 1980, he embarked on a decade-long odyssey in his ancestral Japan, studying and performing with Osuwa Daiko, Sukeroku Taiko, Oedo Sukeroku Taiko, Hogaku Hayashi with Mochizuki Ryu, and Matsuri Bayashi with Maru Kenjiro He has the honor of being the first foreigner to have received a “natori” in hogaku hayashi.

In the greater musical world in America, “Kenny Endo” has become synonymous with the word “taiko.” He is one of the most versatile musicians in the genre, crossing easily between the traditional and his own globally-inspired style. Endo also has an MA in Ethnomusicology and is highly sought after for educational programs and workshops.

Endo has recorded five CDs of original taiko compositions and was a featured artist on the TV special “Spirit of Taiko” in America. He has performed for musicians Michael Jackson, and Prince as well as the late Princess Diana...